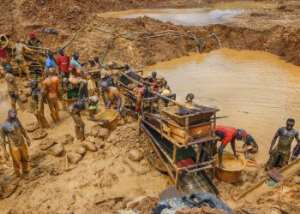 According to party General Secretary Nana Yaa Akyempem Jantuah, this is in sharp contrast to the promise by the President that he will put his presidency on the line to deal with illegal mining.

Speaking at an event in Accra on Wednesday, September 21, to mark this year’s Kwame Nkrumah Memorial Day, she said it is proper for President Akufo-Addo to resign.

“I think it is time for him to resign, I think it is time for Nana Addo to put down his job and allow competent people to take over. He has failed the fight against galamsey, he should resign. We in the Convention Peoples Party are asking him to stick to his promises,” Nana Yaa Akyempem Jantuah indicated in her remarks.

Despite various offorts undertaken by President Akufo-Addo’s government, the fight against galamsey appears very far from being won.

Ever since galamsey kingpin Aisha Huang was re-arrested, there has been pressure on the government to be up and doing.

Since last week, various operations have led to the arrest of over 150 individuals including foreigners who are involved in illegal mining in the country.