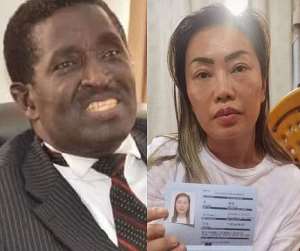 Lawyer Nkrabea Effah Dartey, Counsel for the embattled galamsey kingpin Aisha Huang has disclosed that the husband of his client is a prominent Ghanaian from the Ashanti Region.

The comment of the defense lawyer suggests that Aisha Huang only returned to Ghana to enjoy her husband after she was deported in 2018.

But as to when she got married to the Ghanaian was not stated. He only added they had a customary marriage in China.

Lawyer Effah Dartey further revealed that Aisha Huang has some of her relatives here in Ghana.

The lawyer in an interview on OTEC 102.9 FM's afternoon political show "Dwabrem" on Wednesday, September 14, 2022 only gave the name of Aisha Huang's purported husband as Mr Prince.

"Aisha Huang has relatives in Ghana; her husband is a pure Ashanti man whom she's been living with in Kumasi.

“This person (Mr. Prince) am talking about once went to China to peruse his master’s degree in engineering in China," he told the host of the programme Dr Cash.

According to him, the family of Aisha Huang sought his service as a lawyer to defend the other three Chinese who have been charged alongside Aisha Huang.

The notorious illegal miner is standing trial with three other Chinese nationals Jong Li Hua, Huang Jei and Huaid Hai Hun. They were all charged for mining without a valid license and engaging in the sale and purchase of minerals without a permit.

They will reappear in court on September 27.

Deaf Association calls for deaf-friendly curriculum for deaf...
7 minutes ago

‘Something is wrong somewhere’ — Otumfuo wonders why galamse...
7 minutes ago