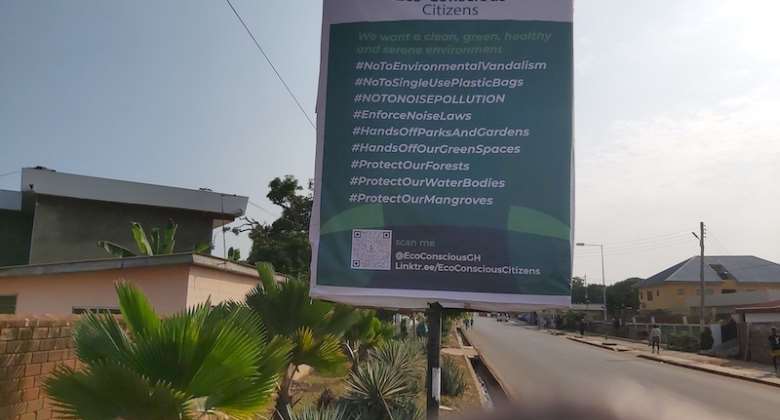 A coalition of environmentalists, residents and concerned citizens, led by the advocacy organisation Eco-Conscious Citizens, will visit the La Dade-Kotopon Municipal Assembly (LaDMA) head office to register their concerns about the non enforcement of bye-laws.

The visit is on Friday September 2, which marks the end of the La Traditional Council's Homowo season ban on noise making.

Enforcement of Noise Abatement bye-laws is at the top of the list of demands, which speak to the Assembly's mandate for creating a clean, green, healthy and serene environment for the well-being of citizens in the municipality.

Eco-Conscious Citizens, representatives of resident groups and active citizens are calling on the Assembly to take concrete steps to ensure that La Dade-Kotopon becomes a clean municipality, where residents can enjoy peace and quiet in their homes.

Two years after the LaDMA MCE gave assurances on Citi TV's 'Hello Mr. President' programme that residents “would see positive results” from the Assembly's tackling of noise pollution by August 2020, the noise pollution from Borla operators and others continues.

Also, it's six months since we were informed that the Operation Clean Your Frontage exercise would sort out noise nuisance and other issues. However, there seems to have been no enforcement, as structures that were painted in red with “remove” and other instructions are still in place.

Their demands are as follows:

1. Enforce Abatement of Noise bye-laws throughout the year and set up active Noise Teams, which can respond especially at night when the breaches mostly occur, and publish a dedicated phone number. Alternatively, the Noise Teams can be outsourced, just as Parking Violations have been outsourced.

2. Cause loudspeakers or "horns" to be removed from borla taxis, and commercial vehicles that ply the streets either making announcements or playing music to attract attention to a variety of goods.

Loudspeakers should only be used by Government Departments, Health Authorities and Assemblies, and statutory bodies for public health and other public interest announcements, and even then, sparingly.

3. Ensure that number plates of borla vehicles are clearly visible in accordance with the Road Traffic Act, 2004 (Act 683). Vehicles without number plates must not be allowed to ply the streets.

4. Conduct an audit of households and businesses, and ask for evidence of who collects their rubbish. If they have no designated collector, LaDMA should ask them to choose one from a list of registered providers and dates and times should be arranged for rubbish collection.

a) reduce dumping of rubbish in gutters, open spaces and frontages

b) remove the need for the various borla operators to cause noise nuisance seven days a week, ostensibly to alert customers

c) reduce burning of rubbish, including plastics which releases toxins, which exposes neighbours to respiratory and other illnesses

The Ga East Municipal Assembly is commended for showing leadership in this regard.

5. Conduct an audit of dwellings in the municipality to establish which homes lack toilets, and give landlords and homeowners a specified period within which to rectify the breach of planning regulations.

6. Ensure that churches and drinking bars abide by laws and bye-laws, and if they use loudspeakers, ensure that their premises are sound proof.

7. Ensure that building regulations are enforced, and that robust measures are taken when bye-laws are contravened, such as the case of changing the design and purpose, after a permit has been granted.

9. Respond to written complaints timeouly, as per the Assembly's charter.

Thanks for your time.