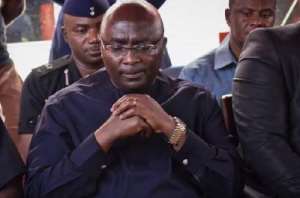 The Vice President of the Republic, H.E Dr. Mahamudu Bawumia is mourning the death of Mioŋ-Lana Alhaji Mahamadu Abdulai.

As reported by Modernghana News on Thursday morning, the Mion-Lana has joined his ancestors after a short illness.

Reacting to news of the passing of Alhaji Mahamadu Abdulai, Dr. Mahamudu Bawumia has stressed that it has saddened his heart.

Describing the deceased as a charismatic chief, the Vice President has extended his condolences to the family of the Mion-Lana.

“Yesterday, I received the news of the sudden death of one of the charismatic chiefs of the Dagbon Kingdom, Mioŋ-Lana Alhaji Mahamadu Abdulai.

“I, together with the Chief of Staff, Madam Akosua Frema Osei Opare, visited the Korle bu hospital to pay our last respects to the late chief and to commiserate with his immediate family,” a post on the Facebook page of Dr. Bawumia reads.

It adds, “I send my condolences to the King, Chiefs and people of Dagbon, to the immediate family of the late chief and the wider Abudu Family of Dagbon on this great loss.

“May Allah accept his soul and grant him paradise.”

Since his death at the 37 military hospital on Wednesday, August 17, the Mion-Lana has been subsequently airlifted to Yendi where he has been laid to rest per Islamic customs.

No insurance package for commercial 'pragya' operators - NIC
46 minutes ago