Two rebel leaders return to Chad ahead of 'national dialogue' 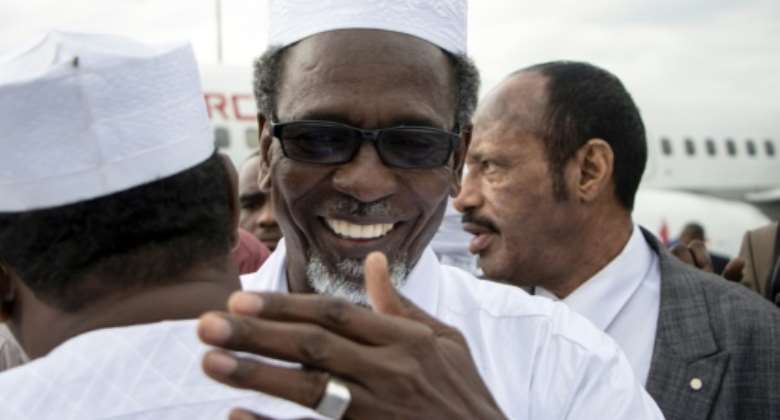 Timan Erdimi has been living in exile in Qatar for at least a decade. By AURELIE BAZZARA-KIBANGULA (AFP)

Two exiled rebel leaders returned to Chad Thursday two days before the start of landmark talks aimed at paving the way for elections after 18 months of military rule.

Timan Erdimi and Mahamat Nouri will be key participants at an "inclusive national dialogue" opening in N'Djamena on Saturday.

Deby took power in April last year at the age of just 37 after his father, who ruled for 30 years, was killed during a military operation against rebels.

Erdimi, the head of the Union of Resistance Forces (UFR), has been living in exile in Qatar for at least a decade.

His armed group attempted to overthrow his uncle, former president Idriss Deby Itno, first in 2008 and again in 2019.

He arrived at N'Djamena International Airport early Thursday, where around 50 relatives and supporters were waiting for him, an AFP journalist saw.

"I am very happy to return home after so many years in exile," said Erdimi, 67, sporting a small white beard and dressed in a traditional gown and white hat.

Nouri, the leader of the Union for Democracy and Development (UFDD), landed shortly afterwards.

Hundreds gathered to welcome the rebel chief, who was wearing a white robe and turban, the AFP journalist said.

Nouri was defence minister under the ex-president before he defected.

He was detained in France in 2019 and charged with crimes against humanity over recruiting child soldiers in Chad and Sudan. He was released the following year for health reasons.

'Will march to own tune'

Deby has hailed the talks from Saturday as a chance for reconciliation in the fractured country, opening the way to "free and democratic" elections within 18 months of the military takeover.

Topics are also to include lasting peace and reforming the state.

The "dialogue" should have started in February but was repeatedly delayed as Chad's myriad rebel groups, meeting in Qatar, squabbled over whether to attend.

In the end, around 40 groups on August 8 signed up to a deal, entailing a ceasefire and guarantee of safe passage.

The UFR, one of the signatories, is estimated to have several hundred fighters, based in southern Libya and northern Chad.

It first attempted to overthrow the government in 2008, then again in 2019, when the group sent a column of fighters in pick-up trucks from Libya via Sudan.

They were repelled with help from France.

The elder Deby, like his nephew Erdimi, hailed from the Zaghawa ethnic group. His successor, the younger Deby, is Erdimi's cousin.

French researcher Jerome Tubiana said he did not think Erdimi would simply toe the government's line.

"He will certainly march to his own tune," he said.

"We can even expect to see Timan (Erdimi) feed tensions, which are considerable at the moment among the Zaghawa community."

The UFDD is based in Libya.

It was weakened after part of it split in 2016 to form another group -- the Front for Change and Concord in Chad (FACT), which triggered the offensive in the northeast last year that ended in the elder Deby's death.

Saleh Kebzabo, a vice president of the forum's organising committee and one-time opponent of the older Deby, said the upcoming talks would facilitate a new constitution which would then be put to a referendum.

But observers say the conference faces major challenges, starting with the pressure of time.

The junta's 18-month deadline runs out in October, leaving scant time for organising ballots in this vast, arid country.

Deby, speaking soon after taking power, also spoke of the option of extending the transition by another 18 months if need be.

"It's not possible to reach an agreement in such a short time," Picco said, adding that an extension of the transition was likely.

Those boycotting the forum include two of the biggest rebel groups and a major political alliance.

The absentees include FACT and Wakit Tamma, a large coalition of opposition parties and civil society groups. They say the talks have been skewed in advance.