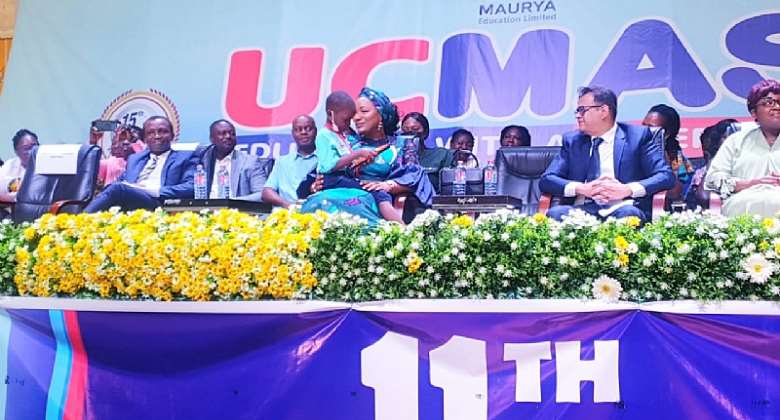 According to her, the narrative of girl-child education has changed drastically which is good for development.

In an interview with the press at the 11th UCMAS National Competition dubbed Africa’s Biggest Arithmetic competition with the theme “Rise and Shine”, she said, Ghana’s education sector has seen a significant increase in female enrollment at all levels, especially at the basic level.

H.E Samira Bawumia explained that the UCMAS is a brain development programme that helps increase the mental and cognitive abilities of children between the ages of 4 to 14.

This year about 3000 students from Private Schools across the country converged at the Pentecost Convention Centre to prove their brain power and battle it out for the ultimate prize to which about 500 participants excel in various categories of the competition with females in the majority.

Madam Irene Kyei Mensah Bonsu, the Sompa Hemaa of Suame and Wife of the Majority Leader of Parliament Hon Osei Kyei Mensah Bonsu, noted that the UCMAS is proof that developing the brain will go a long way to shape the future of the kids.

"It is a blessing and interesting to see the females challenging their male counterparts, the speed and accuracy in UCMAS is something else. The perception of MATHEMATICS being difficult is totally the other way round. I think when you enrolled the child they challenge themselves and do better. We should take that mindset out; everything is possible when you put your mind to it", she said.

She seized the opportunity to call on GES to include UCMAS in their syllabus.

The Business Development Director of Maurya Group, Roger Ohemeng, implementers of the UCMAS program, appealed to Ghanaian parents to consider the UCMAS programme as an opportunity to enhance their wards' education, especially in arithmetics.

"In 2020 we intended of organizing the biggest arithmetic competition in Africa but due to Covid-19, we couldn't. So this year we organize the biggest arithmetic in Africa which was graced with 2,500 children participating in it because of that the theme for this year is 'Rise and Shine'. We believe that during the Covid a number of them went asleep, people were sleeping so they should arise from the state in which they found themselves and shine which we saw how the second lady, Mrs Samira Bawumia was impressed with the children performance", he explained.

He added that as an organisation, they are determined to ensure every Ghana child benefits from the program.

According to him, the program has had pupils from the public schools enrolled in it.

Roger Ohemeng noted that Maurya Group is in discussion with the Ministry of Education to ensure more public schools enrol on the programme.