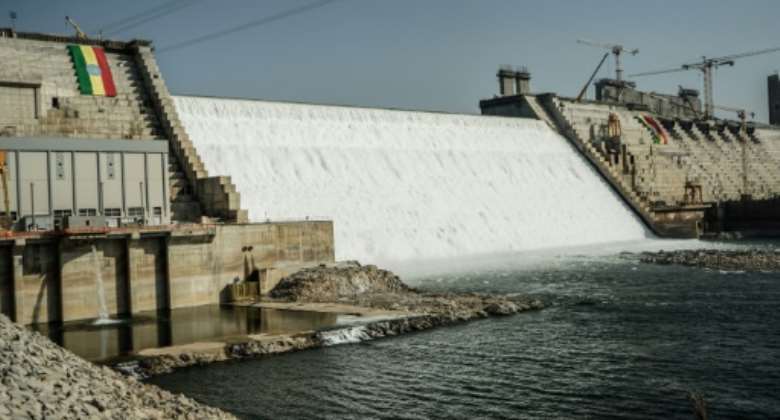 Ethiopia said Friday it has completed the third filling of its mega-dam on the Blue Nile, a development that could raise further tensions with downstream neighbours Egypt and Sudan.

The announcement comes a day after Ethiopia said it had launched electricity production from the second turbine at the Grand Ethiopian Renaissance Dam (GERD) which lies in the west of the country.

"Today as you see behind me, the third filling is complete," Prime Minister Abiy Ahmed said in images shown on state television from the dam site.

"The Nile is a gift of God given to us for Ethiopians to make use of it."

Map of East Africa showing the Nile and the Grand Ethiopian Renaissance Dam. By (AFP)

The massive $4.2 billion dam, set to be the largest hydro-electric scheme in Africa, has been at the centre of a regional dispute ever since Ethiopia broke ground on the project in 2011.

There is still no agreement between Ethiopia and its downstream neighbours Egypt and Sudan about the GERD's operations despite talks held under the auspices of the African Union.

Cairo and Khartoum view it as a threat because of their dependence on Nile waters, while Ethiopia deems it essential for the electrification and development of Africa's second most populous nation.

Egypt, which relies on the Nile for about 97 percent of its irrigation and drinking water, last month protested to the UN Security Council about the third filling.

Abiy again sought to reassure Egypt and Sudan over the impact of dam.

"When we set out to build a dam on the Nile, we said from the beginning that we did not want to make the river our own," he said on Twitter.

"We hope that just like Ethiopia, the other gifted nations of the Nile, Sudan and Egypt, will get to utilise their share."

On Thursday, he had called for negotiations to reach an understanding but insisted the third filling was not causing any water shortages downstream.

The process of filling the GERD's vast reservoir, which has a total capacity of 74 billion cubic metres, began in 2020.

"Compared to last year, we have reached 600 metres which is 25 metres higher than the previous filling," Abiy said Friday.

Ethiopia first began generating electricity from the GERD in February. Currently, the two operational turbines, out of a total of 13, have a capacity to generate 750 megawatts of electricity.

It is ultimately expected to produce more than 5,000 megawatts, more than doubling Ethiopia's current output.

Project manager Kifle Horo said Thursday that overall the dam was now more than 83 percent complete and that the goal was for it to be finished in the next two and a half years.

The 145-metre (475-foot) high structure straddles the Blue Nile in the Benishangul-Gumuz region of western Ethiopia, near the border with Sudan.

The project was initiated under former prime minister Meles Zenawi, the Tigrayan leader who ruled Ethiopia for more than two decades until his death in 2012.