I Cry for Justice not Osagyefo Oliver Barker-Vormawor 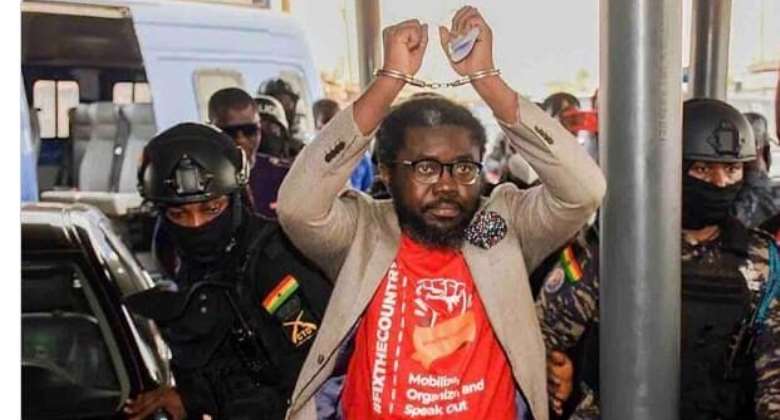 When order fails, chaos erupts like a volcano swallowing everything on it's a path. When sincerity becomes a mere word rather than a practice, trust departs like love ones separated by the long arms of death from each other, and when justice is corrupted, the fear of death becomes nonsense.

According to the The Fourth Estate reports, Mawuse Barker Vormawor was committed today, 1st August 2022, to stand trial at the high court for a treason felony. I am surprised that not many media houses carry the story. However, being awakened by the stark reality of a highly corrupt and manipulated media, doing the bidding of politicians, it is no wonder that only the fourth estate seems to have found the story important and carried the same.

The articulate and logically coherent presentation by the fourth estate reporter on the events at the court sends chills down my spine and I shudder to ask if justice exists in any form in Ghana. I do not cry for Oliver, for I know him not. If I feel anything for him at all, it is an admiration for his confidence and his tenacity to stand against a corrupt system and regime; A system characterised by naked thievery, misuse of public funds, abuse of authority, the deliberate creation of economic hardship to establish a class system where the poor youth of our country are manipulated to fight one another, instead of the political administration responsible for their woes.

In any case, Oliver is a lawyer, and he understands the law better than most of us. What do we care? The challenge is that the battle has never been and is not between Oliver and the state as the courts have misled us into believing. The battle has always been between the innocent citizens of Ghana and a corrupt public system and regime that is gradually crumbling to its knees. A system that is a powdered keg waiting to explode. A system with a shaky foundation and rotten pillars that are dressed fancifully to portray it as robust but which in reality is a disaster waiting to happen.

That Oliver's post on the coup and the military incurs reservations from some people is understandable and appreciated. However, that the same attracts a treason felony charge by the state and a committal trial in a high court is an area open to law researchers.

If a post on Facebook could lead to a treason felony charge and a judge can proceed to allow a trial in the high court on the same, then the indication that our justice system is tainted and sooner than later will come crumbling down should be our fear.

Indeed, not all the judges in our courts are tainted but alarmingly, 'political judges' have risen to our courts and are in the business of obeying their paymasters. This situation is not only detrimental to our criminal justice system but will lead to chaos and anarchy if care is not taken. The courts, human institutions as they are should not be the arena of political gymnastics. They should be a place where justice is at least dressed in the cardinal virtues of truth and sincerity. When the courts deviate from the business of providing justice, there is only one resort, anarchy and pandemonium.

The prevailing culture of silence as a result of the political victimisation and assassination as in the case of Ahmed Suale, though threatening is a cordial invitation to us, the free thinkers, who have nothing to live for than the truth.

Even if the cabal succeeds in killing Oliver, thousands of Oliver will rise and every Oliver you kill shall sprout forth a thousand more Olivers. We have long stopped being afraid of death for death without a fight for one's country is no death.

That is why we must rise, rise, the Olivers of Ghana, rise and speak against evil, rise and tell the president he has gotten It wrong, rise and tell our MPs they have missed the point and rise to join the #freeOliver movement. When they target and kill our resolve individually, we are weakened but when we fight as one, they will run as was the case in Sri Lanka.