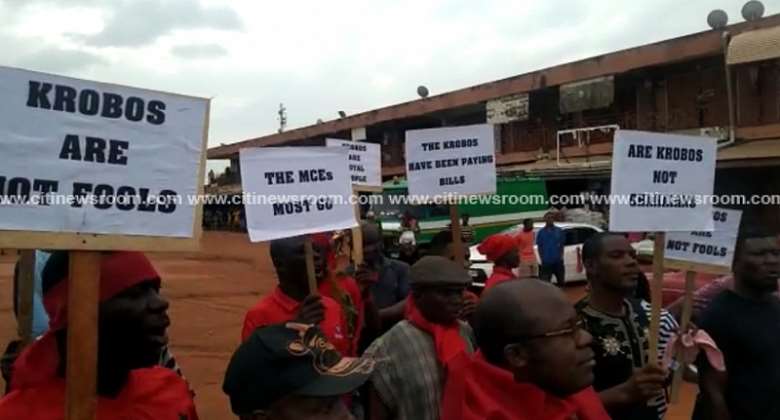 The President of the Eastern Regional House of Chiefs and Paramount Chief of the Manya Krobo Traditional Area, Nene Sakite II, has described as unacceptable the days of power outage in the Krobo area by the Electricity Company of Ghana (ECG).

Nene Sakite II, who expressed shock about ECG’s decision to disconnect the Krobo enclave after series of stakeholder engagements, says the situation which has lingered for almost two weeks is affecting the livelihoods of the residents.

Speaking to journalists on the development, Chief of the Manya Krobo Traditional Area Nene Sakite II called on his people to embrace the prepaid meter system.

“For the past couple of weeks, we have been in the darkness, and it’s been bothering me so much. People are losing their livelihoods because of the outage. This whole thing of darkness is unacceptable.”

Meanwhile, artisans and business owners operating with bank loans say they are feeling the brunt of the power outage and want President Nana Addo to intervene.

“The Krobos have not said, they won’t pay bills. All we want is peace that is why we are insisting that we want constant contact with the ECG, so we solve the issue amicably”.

“I operate an electrical shop at Mampong, but work is not going on. It’s giving me a headache”, said another.

“We are pleading with government to ensure power is restored”, one artisan pleaded.

Where are DISECs in this whole galamsey brouhaha – Otumfuo q...
29 minutes ago

Akufo-Addo announces plan to establish Tourism and hospitali...
29 minutes ago