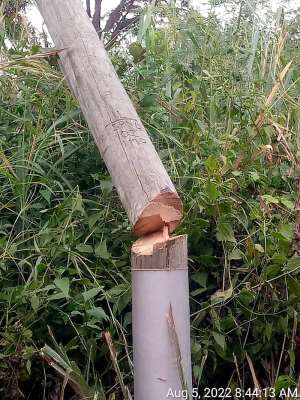 Military Officers have been deployed to the Krobo land over the recent cutting down of high-tension wooden electricity poles with a chainsaw at Adelakope on the Tema-Akosombo highway in the Lower Manya Krobo Municipality of the Eastern region.

The poles connects power to communities such as Akuse junction, Akorley and Aseseeso in the Okere district.

The military officers are tasked to monitor and maintain peace and order in the Municipality following the tension between Electricity Company of Ghana officials and citizens in the community.

The incident is believed to have happened Thursday evening in protest against continuous power cuts in the area.

“Unidentified persons reportedly around 11:00 pm cut off a high tension Pole with a chainsaw at Adelakope on the Tema, Akosombo high way in the Lower Manya Krobo Municipality of Eastern region which connects power to communities such as Akuse junction, Akorley and Aseseeso in the Okere district,” Opambour Gyaman Simon of Rite FM reported.

The ECG cut power supply to Yilo and Manya Krobo municipalities on July 27, 2022, over attacks on its staff and tempering of its transformers by some unscrupulous residents resisting prepaid meter installations.

The situation has led to a national call for the ECG to restore power to the people. Meanwhile, the Energy Ministry, the Eastern Regional Minister, Seth Kwame Acheampong and other government officials visited the area within the week to have a dialogue with opinion leaders to pave way for the ECG to return to their post.