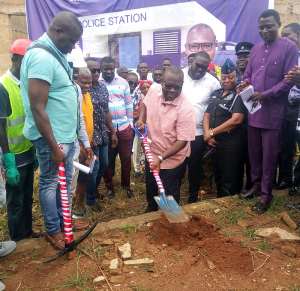 Hon Asenso Boakye, Member of Parliament for Bantama Constituency has cut the sod for the construction of an ultramodern police station at Ohwim-Amanfrom at a cost OF Ghc225,000.

The project, according to Samuel Kwame Broni, the Contractor-Kasboni Construction Company will cover a period of six months.

Speaking at the sod-cutting ceremony, Hon Asenso who doubles as the Minister for Works and Housing announced that several developmental projects have been lined up for the constituency and paramount among them is security.

Completion of Ohwim-Amanfrom police station will complement existing ones at Bohyen and Bantama, all put up by the Member of Parliament.

The high rate of crime in areas including Ohwim, Amanfrom and Atafoa has for years been an albatross on the neck of residents, a situation that has compelled the MP to go all out to find the solution.

According to him, he realised the urgent need to use his influence to fast-track the development of the constituency after assuming office as Member of Parliament.

The construction of 4 AstroTurfs ( 3 completed, 1 ongoing), ongoing construction of the state-of-the-art Basic STEM School at North Suntreso and ultramodern public school (completed) at Hwediem among others were through the effort of the MP.

Nana Ama Achiaa, Queen mother of Akusu community offered the land for the construction of the Ohwim-Amanfrom police station.