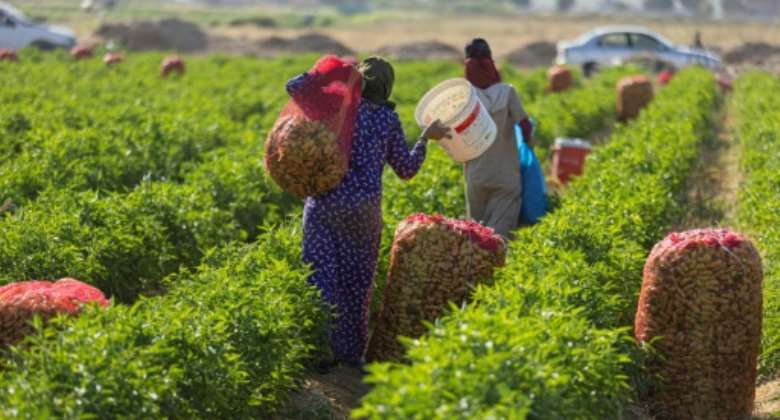 Egyptian smallholders have stepped in to help make up the feared shortfall in the nation's food supply since Russia invaded Ukraine but many of them struggle to break even. By Khaled DESOUKI (AFP)

Egyptian smallholders grow nearly half of the country's crops, a lifeline role increasingly important after grain imports were stalled by war in Ukraine -- but they are struggling to survive.

Despite their crucial role providing food for the North African nation's 103 million people, smallholders are cash-strapped and indebted, frequently selling their harvests at a loss.

"I'm trying to sell my onion harvest but I can't find a market," he said, the remnants of his crop scattered across the soil. "I just want to break even. I don't know how I'm going to pay rent".

His onions would sell in Egypt: but financing, marketing and infrastructure hurdles create massive gaps between supply and demand.

According to the United Nations Food and Agriculture Organisation (FAO), small farms are the "primary producers" of food for domestic consumption in Egypt.

Farmers cultivating less than three feddans (1.2 hectares, three acres ) -- an area the size of a football pitch -- till 35 percent of arable land.

Yet they produce some 47 percent of Egypt's field crops, the FAO calculates.

Larger farms focus more on exports -- a dynamic that came to a head when Russia invaded Ukraine.

Egypt, the world's leading importer of wheat, relied on Russia and Ukraine for 80 percent of its imports, providing the flour for Egypt's traditional flat bread.

Smallholders cultivating plots no bigger than a football pitch produce nearly half of Egypt's field crops, making their role key in making up for any shortfall in imports. By Khaled DESOUKI (AFP)

Ordinary Egyptians eat bread at almost every meal, and Egypt's wheat farmers ramped up production to 40 percent of the country's needs.

"Without the 40 percent of wheat that we produce domestically," rural sociologist Saker al-Nour told AFP, the consequences of the war "would be much worse."

By June, farmers had provided more than 3.5 million tonnes, according to the supply ministry, over half the domestic supply goal to August, and equal to the total amount supplied in 2021.

Compulsory crop deliveries were a pillar of president Gamal Abdel Nasser's socialist policies in the 1960s, but those policies were dropped amid the structural adjustment programmes of the 1990s.

With them went the former subsidies on seeds, pesticides, and fertilisers which have steadily shrunk over the decades.

"Instantly, when things got tough, it went back to compulsory delivery, but this time without the services that came with it," Nour said.

To encourage farmers to grow wheat, the government had previously set domestic prices higher than imports.

But the unprecedented surge in global prices undermined that.

"Now I owe money to the pesticide guy, to the fertiliser guy," Aboueldahab said. "So if someone comes along and bids a low price, what am I supposed to do?"

Egyptian smallholders wield little negotiating power in the marketplace making it difficult for them to avoid sliding into debt. By Khaled DESOUKI (AFP)

One solution is for smallholders to join together and harness the power of technology.

It also helps farmers "become a bloc", in the absence of effective local cooperatives and sets prices "as a form of protection" against market fluctuations.

Nour warns smallholders have "very limited negotiating power, especially when they don't have the storage capacity for their harvest".

But with illiteracy among smallholders at 32 percent, according to the FAO, offline village associations are necessary.

These associations could, for example, communicate extreme weather events quickly and directly to farmers whose crops are at risk.

These tools exist, the sociologist said. "We just need to make them available to small farmers."