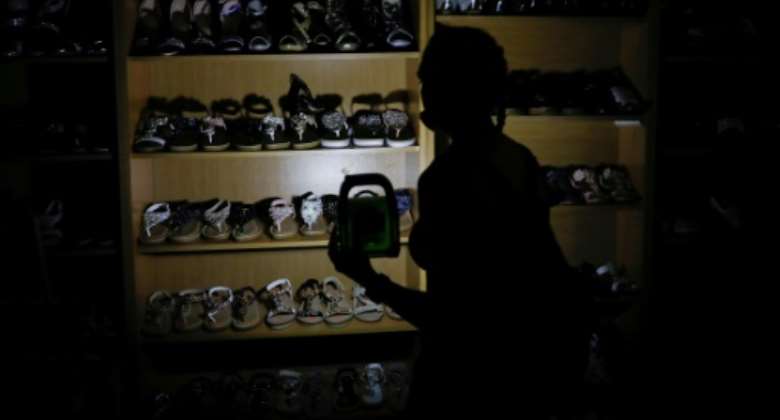 Shopping by torchlit: Rolling blackouts have inflicted wrenching change on life for many South Africans. By Phill Magakoe (AFP/File)

You can't do your work because there's no power. You eat late and bolt your food before the lights fail. And then to be at home, in the utter dark, gives you the creeps.

As blackouts unfurl across South Africa, triggered by problems that have overwhelmed its energy provider, stress is taking a mounting toll on mental health, experts say.

"People are frustrated, some (are) angry, some are experiencing symptoms" of post-traumatic stress disorder, said Sinqobile Aderinoye, a psychologist in Johannesburg.

"The consistent on-and-off of the electric grid is creating an air of disillusionment."

South Africa has struggled for years with power cuts, known here as load-shedding, as as its monopoly utility Eskom failed to keep pace with demand.

But ageing infrastructure and labour disputes have added to the crisis -- and in recent weeks, the country has been hit by rolling blackouts that can last up to nine hours a day.

"There was a time ... I felt like I was going to scream," said Blessed Dlamini, a 25-year-old father living in downtown Johannesburg.

For five hours, he recalled, he had no power as he struggled to work and at the same time deal with a hungry two-year-old.

"It was very, very hectic," said Dlamini who works for a sexual health centre.

Blackouts eased this week, with cuts reduced to about two hours a day.

But the schedule of cuts provided by Eskom is not always followed, giving rise to an unpredictability that leaves many people on edge.

The crisis "is leading to feelings of hopelessness, which is associated with depression," said Claire Lownie, a psychiatrist in Johannesburg's financial centre, Sandton.

Plunged into darkness with a sense of unmet basic needs, the human brain can be triggered into survival mode, leading to a fight-or-flight response, explained Aderinoye.

"The brain starts to think we are under attack. The body is then notified that we are in danger and we create an anxiety response," she said.

At work, on the streets or around the dinner table, swapping tips on how to cope with blackouts has become a national pastime.

Some people prefer the romantic feel of candles to light their homes, while others resort to camping lanterns.

Others debate whether coughing up money for take-out meals is preferable to investing in gas cookers or simply eating at odd hours.

Yet, in a country burdened by high crime rates, outages aren't a simple inconvenience. Fear of burglary, assault or rape runs deep.

"You cannot go around when it's dark," said Flora Sithole, 30, a domestic worker employed in the upmarket Johannesburg suburb of Rosebank.

Anxiety, depression and other disorders were already up almost two-thirds since the start of the coronavirus pandemic, according to Cheryl Johnston, a Johannesburg-based psychologist.

"A lot of people are at or crossing over (their) breaking point," she said.

The result can be "abnormal behaviour" as well as angry or violent outbursts, Johnston said.

Having a plan and being prepared to deal with the cuts is the best way to cope, according to health experts.

"Being able to be honest with yourself about the emotions that you're having and waiting for yourself to be calm before taking action… is best thing you can do," she said.