By Milan BERCKMANS with Portia CROWE in Dakar
Gambia 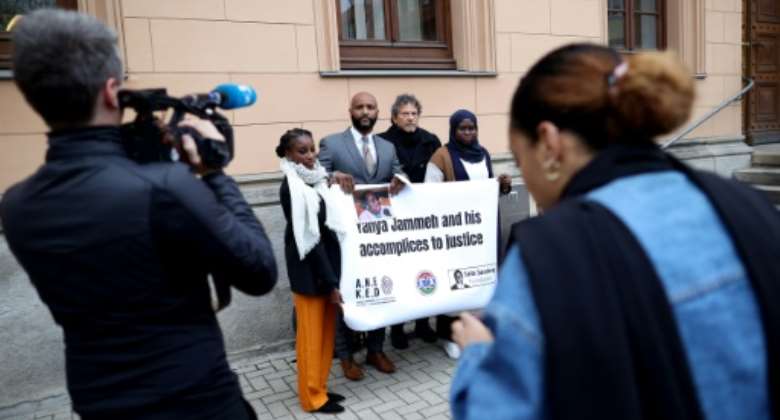 The trial over the killing of Ebrima Solo Sandeng, a Gambian political activist, lasted more than five years. By Ronny Hartmann (AFP)

When Muhammed Sandeng first learned that his father, political activist Ebrima Solo Sandeng, had been tortured to death at the Gambian national spy agency's headquarters, he felt one emotion above all else.

"It was all fear -- fear, fear, fear -- you had to be wise for your life because you didn't know what would happen," the student, 19 at the time, told AFP.

On Wednesday, Sandeng felt something new, "fulfilment and relief", after the High Court of Banjul found five ex-intelligence officials guilty of the 2016 murder.

His father's violent death was one of the most high-profile abuses committed under ex-president Yahya Jammeh's brutal 22-year regime and galvanised a political movement that eventually ousted the dictator.

They will be converted to life sentences because The Gambia has a moratorium on executions.

"We were always there, during the preliminaries, and listening to all of those (hearings) was not easy -- it was painful and made us relive most of the trauma," said Sandeng, now 25.

"The persistence has paid off."

'Beginning of the end'

Solo Sandeng, a key member of the opposition United Democratic Party (UDP), was arrested at an April 2016 anti-Jammeh protest and died in custody two days later.

According to Abdoulie Fatty, a Gambian lawyer, that was "the beginning of the end" for the dictator, who is accused of committing a litany of crimes, including rape, witch hunts and forcing bogus cures on AIDS patients.

Only two trials have been held within The Gambia over Jammeh-era crimes. By ROMAIN CHANSON (AFP)

The killing encouraged the political opposition to unite behind Adama Barrow, who beat Jammeh in the December 2016 presidential election.

Launched in 2017, the trial was fraught with tension, reflected by brawls outside the court.

The accused blamed Solo Sandeng's murder on Jammeh's private death squad despite it taking place on the intelligence agency's grounds.

Witnesses recounted how men took turns beating him in custody "until his whole body was bleeding and blood was coming out from his head".

Badjie, the agency's director, was "probably the second most powerful individual in the country", he added.

On Wednesday, security guards had to remove several members of the public when shouting broke out after the guilty verdicts were pronounced.

The ruling offers some hope to other Jammeh-era victims.

"For me, personally, as a victim, it means a lot," said Isatou Jammeh, whose own father -- Yahya Jammeh's brother -- disappeared and was later killed after challenging the ex-president.

"Seeing them sentenced means that there is rule of law, and it serves as an example to all those who have committed gruesome crimes," she said.

But the Solo Sandeng case was an outlier -- one of only two domestic trials tied to Jammeh-era crimes.

After it began, the justice ministry opted to wait for a Truth, Reconciliation and Reparations Commission (TRRC) to conclude before launching other investigations.

Yahya Jammeh ruled The Gambia with an iron fist for 22 years. By afp (AFP)

"The TRRC was not a judicial body and it's the state's responsibility to conduct prompt and impartial investigations in parallel," said Nana-Jo N'dow, a campaigner whose father disappeared in 2013.

In May, following the publication of the TRRC's final report, the government vowed to prosecute Jammeh, who remains in exile in Equatorial Guinea, and more than 200 others accused of abuses.

But victims' groups say it has not shown how it will make good on those promises.

"In the meantime, Jammeh allies are in positions of power in Gambia," N'dow said.

President Barrow, who was re-elected in December, last year formed a political alliance with Jammeh's former party and has since nominated two of his supporters as speaker and deputy speaker of parliament.

'We will get him'

In late May, Barrow travelled to Equatorial Guinea, but there was little mention of Jammeh during his talks with President Teodoro Obiang Nguema Mbasogo, a government spokesman said.

The state says it has hired foreign and domestic lawyers to work on trying the ex-president, and in mid-June the Justice Ministry said it would suspend any current state employees accused of abuses in the TRRC report.

A ministry spokesman on Friday did not respond to requests to confirm whether those suspensions had taken place.

But in late June, the Attorney General indicated to a parliamentary committee that the government presently lacks the financial resources to implement the TRRC recommendations.

"There's more that needs to be done around security reforms and institutional reforms," said Muhammed Sandeng.

But as for Jammeh, he said: "It is very evident that justice is catching up on him and surely, sooner or later, we will get him."

Blaming NDC for the booing of Akufo-Addo insulting to the se...
52 minutes ago

Security agencies failing in Ashanti Region, they lack the s...
56 minutes ago