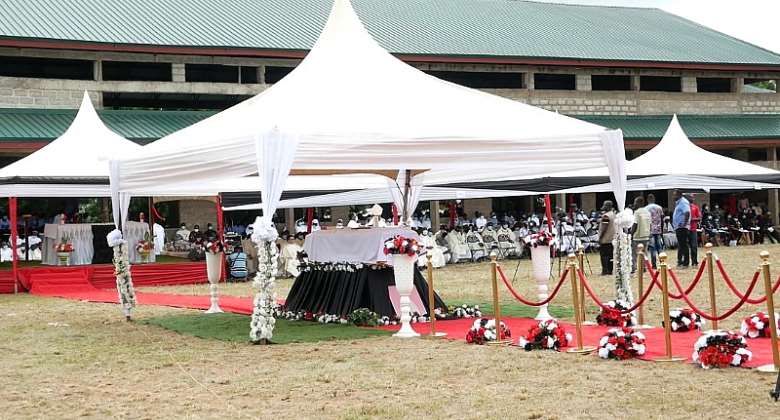 Most Reverend Gregory Ebo Kpiebaya, Archbishop-Emeritus of Tamale who was one of the longest-serving leaders of the Catholic Church in the country, has been laid to rest after a requiem mass in Tamale.

The solemn ceremony, interlaced with songs amidst dancing, was heavily attended by Catholics within and outside the country including Henryk Jagodzinski, the Apostolic Nuncio to Ghana (Pope’s Ambassador), Most Reverend Charles Gabriel Palmer-Buckle, Archbishop of Cape Coast, Most Reverend Richard Kuuia Baawobr, Bishop of Wa and Cardinal-elect, amongst other Bishops, and Priests, and members of the public.

Archbishop-Emeritus Kpiebaya, who died on May 31, this year, was born in 1933 at Nanvilli, Kaleo Parish in the Upper West Region.

He was ordained Priest in the Catholic Church in Wa in September, 1962, and his first appointment after his ordination to the Immaculate Heart of Mary Parish, Daffiama where he worked as a curate.

After almost 20 years of episcopal ministry in Wa, Bishop Kpiebaya was appointed the Metropolitan Archbishop of Tamale in March, 1994, and was installed in November, 1994, a position he held until his canonical resignation in February, 2009.

As Bishop and Archbishop, he discharged his duties with courage, unwavering faith, indefatigable zeal, and dedication, and besides his episcopal pastoral work and diocesan administration, he served in various capacities in the universal, regional and national churches.

Most Reverend Philip Naameh, Metropolitan Archbishop of Tamale, led the sermon during the requiem mass in Tamale.

Most Reverend Peter Kwasi Sarpong, Archbishop-Emeritus of Kumasi, the most senior Member of Ghana Catholic Bishops’ Conference (GCBC), performed the Rites of Commendation on the body of the late Archbishop-Emeritus Kpiebaya before it was buried at the Our Lady of Annunciation (OLA) Cathedral, Tamale.

Most reverend Paul Bemile, Bishop Emeritus of Wa Diocese, in a homily, spoke highly of Archbishop-Emeritus Kpiebaya extolling his virtues and contributions to the church.

Most Reverend Bemile said the number of national and regional level awards Archbishop-Emeritus Kpiebaya received in recognition of his contribution to peace and development were a great legacy that he left behind.

He said the Catholic Church would continue to cherish him as a unique member, who made lots of contributions to the growth of the church in the country.

He said “We should be encouraged by what he did and thank God for the gift of his long life, which had been a blessing to the church.”

Most Reverend Joseph Osei-Bonsu, Bishop of Konongo-Mampong Diocese, who read a tribute on behalf of the GCBC, recounted Archbishop-Emeritus Kpiebaya’s roles as a member of the GCBC saying the GCBC had lost a strong servant and one of its dependable leaders.

He said Archbishop-Emeritus Kpiebaya would be remembered for his contributions to the GCBC and the church as a whole.

The Northern Regional Minister, in a remark, said it was time to reflect on the contributions of the late Archbishop-Emeritus Kpiebaya, whose life was an epitome of humility and love for mankind.

He lauded his contributions to the peace and development of especially the northern part of the country.

Professor Nana Opoku-Agyemang, who represented former President John Mahama, said the late Archbishop-Emeritus Kpiebaya served with diligence and stayed focus, adding “He was a unifier. He also turned into opportunities what could have been challenges, and left all these examples to all of us.”