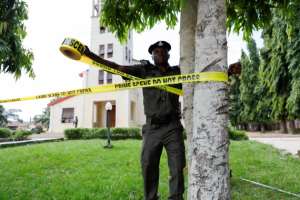 On June 27, police in the city of Bauchi, the capital of northern Bauchi state, arrested and detained Salisu and Kamal, both with the privately owned Wikkitimes news website, according to the journalists and their lawyer, Idrees Gambo, all of whom spoke to CPJ by phone, and a statement by the International Press Center, a local press freedom organization.

Police released the journalists later that day but ordered them to return for further questioning the following day, they said.

On June 28, police took Salisu and Kamal to a local magistrate court, where they were charged with criminal conspiracy, defamation, and cyberstalking over reporting published by Wikkitimes on May 18, according to the journalists and their lawyer.

They were held overnight and then released from custody on June 29, after providing sureties on bonds of 100,000 naira (US$238) each, Salisu and Gambo told CPJ, adding that the prosecution dropped the cyberstalking charge as the court lacked jurisdiction. Their next court date was scheduled for July 25.

Convictions for defamation and conspiracy each carry up to two years in prison and an unspecified fine, according to Gambo.

“The prosecution of Wikkitimes journalists Haruna Mohammed Salisu and Idris Kamal offers yet another example of the criminalization of the press in Nigeria,” said Angela Quintal, CPJ’s Africa program coordinator, from Durban, South Africa. “Authorities should swiftly reform the country’s laws to prevent the targeting of journalists, drop all charges against Salisu and Kamal, and allow them to work without fear of arrest or harassment.”

That May 18 Wikkitimes report concerned threats against Husseini Musa Gwaba, the Bauchi state chairperson of the All Progressives Congress opposition political party prior to his death in May, and alleged that former APC member Yakubu Shehu Abdullahi had been displeased by Gwaba’s appointment as chair.

Abdullahi filed a complaint over the article, which sparked the journalists’ arrest, according to Salisu and the International Press Center statement.

Bauchi state police texted Salisu on June 18 asking him to come to the state’s Criminal Investigation Department for questioning, the journalist said, adding that he was out of town and agreed to meet with officers the following week.

Salisu went to the station with Kamal on June 27, and when Salisu told police that Kamal had authored the May 18 report, officers detained both journalists, according to those sources. Mohammed and Salisu told CPJ that officers encouraged inmates to slap and kick the journalists while in detention until Salisu offered to pay the inmates 3,000 nairas (US$7) to stop.

When CPJ called Abdullahi for comment, he hung up after a CPJ representative identified themselves. He did not answer subsequent calls or text messages seeking comment.