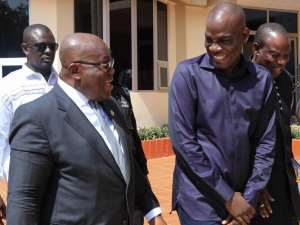 The Minority Leader, Haruna Iddrisu has admonished the Akufo-Addo administration to take full responsibility for what he calls the reckless management of the economy that has taken Ghana to the International Monetary Fund (IMF).

He argues that no justification from the government about the reasons for going to the IMF will wash.

Addressing the press in Parliament, Haruna Iddrisu called on the government to take steps to reduce profligate expenditure.

“President Nana Addo Dankwa and Dr. Mahamudu Bawumia should take responsibility for incompetently managing the economy to suffocate debt levels which have necessitated the retreat for us to request an agreement with the International Monetary Fund for the restructuring of our debt.”

A delegation from the IMF has begun talks with the Ghanaian government over an economic support package.

The government’s decision to resort to the IMF comes after the government’s controversial revenue generation policy, the electronic transfer levy, failed to generate the needed revenue targets.

Efforts to tame rising inflation rates have also not been successful.

Latest Photo Reports
Catch up with all the political quotes from our politicians.
Advertise here
More from Politics
ModernGhana Links
U/E/R: Tempane DCE commends Akufo-Addo for visit to the region
U/E/R: 'Continue to trust in the Lord for giving you a great leader like Akufo-Addo; 2022 is year of water' — Cecilia Abena Dapaah [VIDEO]
Ghana Card will solve problems with voters’ register – Kofi Akpaloo
TOP STORIES