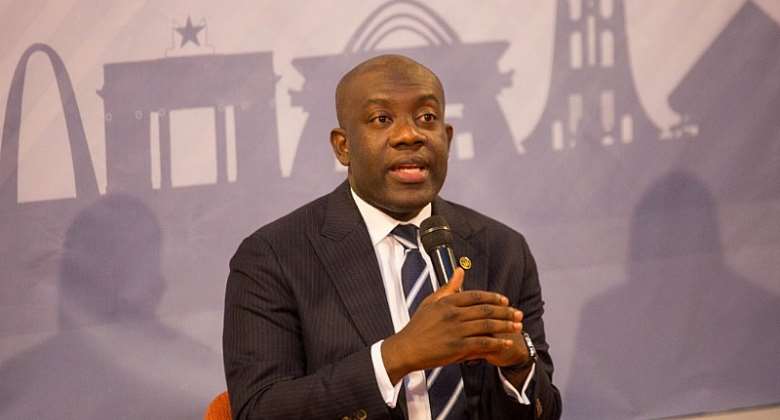 Information Minister Kojo Oppong Nkrumah has said the good records of the Finance Minister Ken Ofori-Atta are clear for everybody to see.

He said this while answering a question at the 3businesscolloquium organised by Media General on Wednesday July 6, as to whether Mr Ofori-Atta should resign following the decision by the government to go to the International Monetary Fund (IMF) for support.

He said “The record of the Minister, from 2017 to 2019 is clear. Not everybody will agree with that but that is fine, in a democracy not everybody is supposed to agree with the view of one person, there are those who don’t share that view, that is ok.

“His records from 2017 to 2019 speaks itself, his records in previous negotiation speak for themselves. There are things that have changed in the exogenous circle around us which we explain are dominant reasons. I do not think the competence of the people at the table should deny them the ability to do.”

Mr Ofori-Atta suffered flak due the decision by the government to head to the IMF for support despite repeated assurances by him that the country would not go to the Fund.

But some of his colleague ministers including the Minister of Railway Development, John Peter Amewu have defended him.

“This Finance Minister has been one of the best brains so far, everybody can attest to the fact,” Mr Amewu who is also lawmaker for Hohoe told TV3's Paa Kwesi Asare.

When his attention was drawn to the fact that Mr Ofori-Atta has been borrowing, he said “What is wrong with borrowing? If you borrow for a good reason there is nothing wrong, when you borrow for consumption, that is when you have a problem.

“The infrastructural development that we are seeing today, it is part of the borrowing and we are borrowing for good reason. These projects as have clearly demonstrated, are bankable projects, so if you borrow to finance a bankable project that has shown all elements of bankability, I don't think there is anything wrong about it.