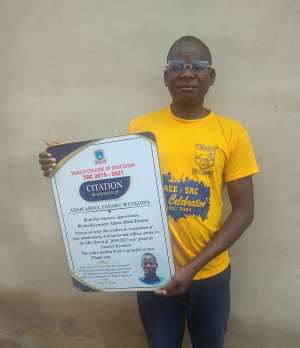 He was recognised for his hard work, dedication to duty and support to student growth as SRC General Secretary of the College.

Mr Abdul-Fatawu was awarded a citation of Honour alongside other deserving former executives of the Council and staff of the college for their commitments to duty and hard work.

The move formed part of efforts by the SRC to encourage and motivate student-leaders as well as staff members to put in their best in the discharge of their duties, and also support the development of both academics and social life of students.

The citation which was presented to the deserving members last Friday reads,"With our greatest appreciation, we hereby present Adam Abdul-Fatawu Wunizoya with this citation in recognition of your commitment, dedication and selfless service to the SRC Board of 2019 to the 2021 year group as General Secretary. The entire Student Body is grateful to you. Thank you."

The SRC President of the College Master Tahiru Mohammed Murtala, minutes before handing over power to his successor Alhassan Nuhuman Sibdow at a short ceremony, said the citation was given to the selected members for their continual commitment to duty and support to student development in the institution.

Other deserving members included the Principal and Chief Executive Officer(CEO) of the College Dr Sulemana Iddrisu and Mr Abdulai Ibn Azindoo the ICT lecturer and the Student Loan Coordinator of the college.

The handing over became necessary after the service term of the former SRC executives ended after having served two years in office(2019-2021).

Some of the achievements of the board included the provision of water storage for the college, provision of chairs, and tables, tiling of bathrooms, purchasing of Public Address(PA) systems, and organising of debate and sports competitions.

Others were successful in organising General Assembly and SRC week celebration among others.