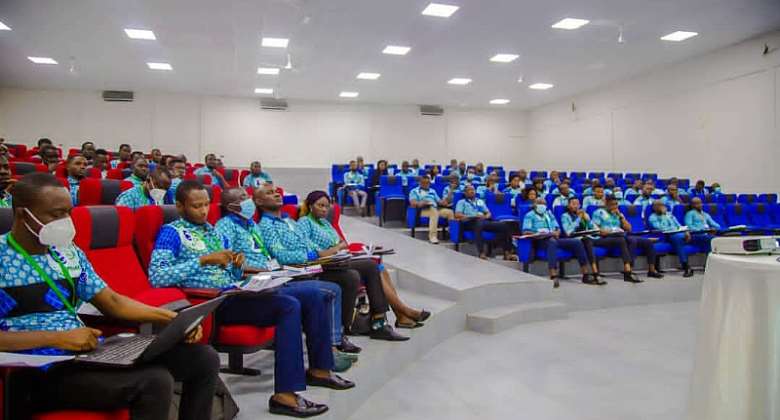 The 5-day meeting, which was held in Sunyani and commenced on June 20 was attended by all regional executives and the National Council.

Leadership of the union discussed how it could further improve upon its existing welfare packages (loan scheme, hire purchase, insurance scheme for all members, land and housing scheme, scholarship scheme).

It gave updates on other packages such as the Scholarship Scheme, The Auto Scheme and the UPNMG Fund.

Leadership indicated that plans are far advanced to roll out its flagship scholarship scheme for all members willing to pursue nursing and midwifery related courses at different levels in the country.

Leadership indicated that the much-awaited auto scheme which has been on the agenda of the Union is at its final consultation phase and will soon be rolled out.

Leadership indicated that they have registered The UPNMG Fund to which every member contributes a minimum GHS50.00 as a Fund Management Company - The UPNMG FUND LBG.

The ingenious venture of operating the UPNMG Fund as a Fund Management Company will have the following implications;

Migration of Nurses and Midwives

Leadership expressed concerns about the recent migration of Nurses and Midwives from the country to the United Kingdom (UK), attributing the mass exodus mainly to the poor conditions of service in Ghana.

Leadership indicated that they will issue an official communique to its employer to see how best they can collaborate to reduce the occurrence.

Procurement of motorbikes to enhance mobility

In order to enhance the mobility of District and Regional Executives, leadership agreed to procure three motorbikes for each region.

This is expected to help the various regions respond to the calls of members and also facilitate district tours.

Refund of The Nurses Fund to UPNMG Members

Leadership thoroughly discussed the refund of The Nurses Fund to current members who used to belong to the Ghana Registered Nurses and Midwives Association (GRNMA). The legal team was present to answer questions on that matter.

The legal team noted that they have defeated the GRNMA in two defamation suits filed against them [UPNMG] at the Kumasi High Court.

The National Council unanimously agreed to continue working for the union without taking allowances.

The regional quota has also been extended to the various districts, with each district entitled to an amount from the dues of each member in that particular district, which is to directly facilitate the work of the executives in the regions and districts.

Leadership indicated that they are determined and fully committed to ensuring that there is a vast improvement in the conditions of service of Nurses and Midwives in the country.