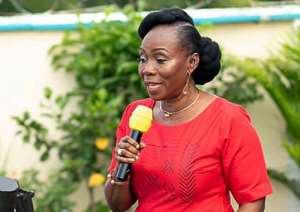 She has recently authored a book which seeks to celebrate the authenticity and creativity of six amazing Ghanaian women, who are doing quite well for themselves and their race.

According to her, she is using the book to break the prejudice against women because women sometimes fail to appreciate themselves, which most often contributes to the discrimination that they face.

"I am using this book to break the bias because the women in the book needed to be told what they are. They take for granted who they are, so I have to do that. Otherwise, these girls are good, but they will not always see themselves as such. So then there is a bias against them all the time and they allow it to rule them,” she said.

In furtherance, the Stratcomm CEO asserted that women underestimate their potential which compelled her to use the book as a tool to deliver the world psychologically from bondage and promote knowledge of what women can do.

“Women underestimate ourselves, so I am using this book to liberate their minds, and when the minds of women have been liberated, the men will begin to appreciate us. So this is a deliverance mission to deliver the world from holding itself in bondage to the knowledge of what women can do,” she stated.