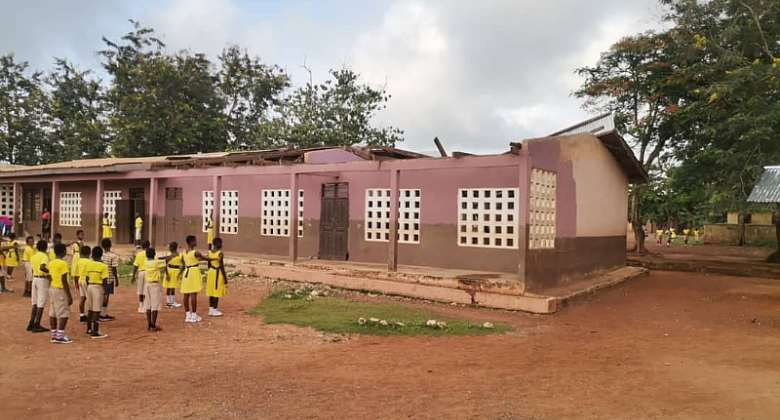 Pupils at Fufuo Methodist Primary School in the Atwima Nwabiagya North District of the Ashanti Region are now using a church building in the community as classroom for academic activities.

The pupils from both primary five and six numbering about 100 have been struggling with their daily school activities in the makeshift classroom for three months now forcing some of them to abandon school.

This is because two classrooms at the school which have been damaged by violent rainstorm in March 2022 are yet to be repaired.

The storm which preceded a torrential rainfall displaced the roof of primary five and six classrooms.

Some teachers who unanimously spoke to this reporter on Thursday May 26, 2022, said the situation forced school authorities to shelter the students in the church.

They disclosed that the matter has been reported to their superiors at the district education office awaiting response and actions.

The teachers however called on all stakeholders to urgently suport them get their classrooms back for effective teaching.

For his part, the unit committee chairman of the area, Rockson Ntiamoah said countless reports have been made to the district assembly for support but are yet to hear from them.

He opined that, the current learning condition is disrupting academic works in the school as students struggle to get enough space to learn.

When contacted by this reporter, the District Chief Executive for Atwima Nwabiagya North, Hon Rebecca Yeboah said she was waiting for a repair estimate from works department of the assembly to assist the school.

She added that, they had been slow because the storm had affected other schools and institutions forcing them to get resources for all affected areas.