'Like a family': exercise clubs build unity in Burundi 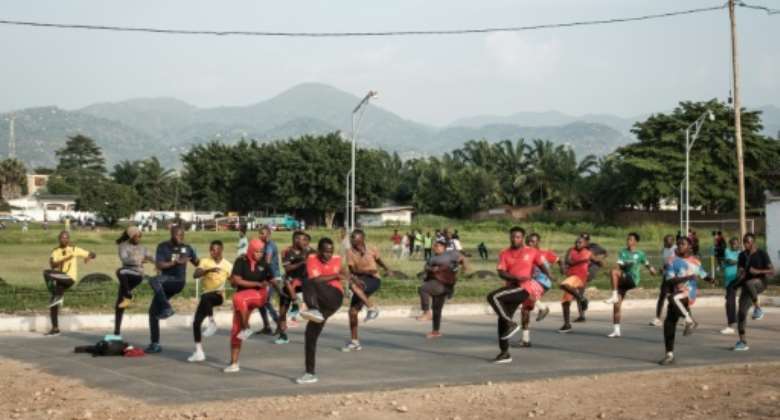 It's a Tuesday in Burundi's biggest city, and like every week just before sundown, crowds young and old huff and puff in lockstep as a coach shouts encouragement and blasts his whistle.

"Tired?!" he yells at the dozens of men and women jumping on the spot in a large circle, lifting his voice above the pop and Afrobeats blasting from nearby speakers at the weekly exercise club.

Two other groups have converged on the concrete basketball court on the shores of Lake Tanganyika for their regular fitness meet.

Some arrive in fluorescent tracksuits, others in whatever outfit they happen to be wearing, their cell phones and other possessions piled together for safe-keeping as they sweat and heave in unison.

One of the regular attendees at Beach Club Solidarity is Sacree Metela, a 32-year-old, who says she comes for the sense of community atmosphere.

"Being together gives you a certain amount of courage, it encourages you even if you're tired," she says, pausing for a breath.

These exercise clubs are a familiar sight across Bujumbura, and have played their own small part in helping heal divisions following the country's violent upheaval in recent times.

In 2015, a political crisis set off a bloodbath across this small, landlocked country, and the violence rippled through its largest city wedged between Lake Tanganyika and rolling hills.

Hussein Sinangwa, who co-founded Beach Club Solidarity in 2004, said attendance fell away at the outbreak of turmoil, but picked up quickly once security improved.

"People came out in droves," said the 69-year-old fitness enthusiast.

Exercise clubs have played their own small part in helping heal divisions after a bloody political crisis kicked off in 2015. By Yasuyoshi Chiba (AFP)

"After the crisis, it was very important to get together."

Since independence in 1962, Burundi has witnessed terrible cycles of bloodshed between its Hutu and Tutsi communities, estimated at 85 percent and 14 percent of the population respectively.

The country of 12 million is a melting pot of ethnic and religious groups, but sports clubs offer a common cause.

A once-prominent member fell foul of the club for "poisoning" other attendees with talk of ethnic troubles.

"We kicked him out," Sinangwa said.

Anyone can attend his casual weekly get-together, and come and go as they wish.

Entry is 200 Burundian francs (10 US cents), a small fee even in the world's poorest country by GDP per capita.

Some club attendees said they appreciate the community atmosphere fostered in the fitness sessions. By Yasuyoshi Chiba (AFP)

"It's very cheap! Gyms are very expensive, not everyone can afford them", admitted 19-year-old Sheila Mpawenimana.

Attendees at Beach Club Solidarity can also make small donations to the coach, who moves around the circle subtly taking any contributions.

This initiative aims to assist those club members in need of extra cash to cover emergencies or deaths in the family, said Sinangwa.

The country is mired in an economic crisis that has made the cost of living unbearable for many, and left some essential goods in very short supply.

Until earlier this year, Burundi was under economic sanctions imposed by the EU over the recent political troubles. US sanctions were lifted last year.

On the surface, life has seemingly returned to normal, even if the government's poor record on oppression and rights abuses has not improved.

But the fragile healthcare system remains very weak, and in the absence of formal safety nets, these exercise clubs are more important than ever.

"It's like a family. When you have a problem, everyone is here to help," said Mpawenimana, before re-joining the circle.