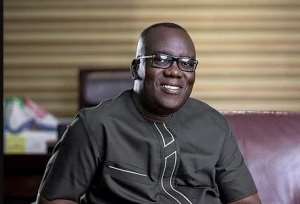 Revelation that the deceased Chief Executive Officer (CEO) of the Ghana Forestry Commission (GFC), Mr. Kwadwo Owusu-Afriyie – aka Sir John – created what is known as “a shell company” to mischievously and deviously cede ownership of parcels of landed properties integral to the Achimota Forest Reserve, ought to come as absolutely no news or nothing strange or completely out of the ordinary to any mature adult Ghanaian citizen of my age and generation or older (See “Charles Owusu Speaks after Sir John, Achimota Forest Issues Emerge” Ghanaweb.com 5/23/22).

Ironically, but not altogether unexpectedly, this clearly unethical and patently criminal and corrupt official practice of alienating or expropriating and cannibalizing state-owned properties for private ownership and use is the one salient hallmark of what has come to be known as The Fruits of The Rawlings Revolution, a brazen racket that was spearheaded by the self-righteous leadership of the erstwhile Chairman Jeremiah “Jerry” John Rawlings-led bloody and extortionate junta of the Provisional National Defense Council (PNDC), presently suavely and strategically morphed into the Rawlings-founded faux-civic political establishment of the National Democratic Congress (NDC).

So, it comes as rather morally repugnant to hear some latter-day National Democratic Congress’ shills and propagandists accuse some key operatives of the presently ruling Akufo-Addo-led government of the New Patriotic Party (NPP) of what has come to be known and termed as “State Capture,” that is, a criminally corporate and collaborative attempt by a platoon of highly privileged and powerful public or government officials to cannibalize that which is legally and statutorily earmarked for the collective use of all Ghanaian citizens and residents. This criminal and ungodly practice was especially pronounced during the 8-year period and two democratically elected terms of the Chairman Rawlings-led government of the National Democratic Congress, strategically and opportunistically birthed by the erstwhile Provisional National Defense Council, which occupied the democratic reins of governance from January 1993 to January 2001.

Beginning with the Architect of the so-called Rawlings Revolution, this decidedly kleptocratic exercise in “State Capture” took the form of the giveaway privatization of state-owned real-estate and landed properties. It was, indeed, going by this kleptocratic principle of primitive capitalist acquisitiveness that in the wake of his seismic and, some even say, the apocalyptic defeat of then-incumbent President John “European Airbus Payola” Dramani Mahama, the former political right-hand man to the late President John Evans Atta “Woyome” Mills, demanded to be literally gifted the official residence of Ghana’s Vice-President, which was then occupied by President Mahama, and had once been occupied by the late former Vice-President Aliu Mahama for 8 years, after which the latter responsibly, wisely and dutifully vacated the same to make way for its official use by his immediate successor, namely, Mr. John Dramani Mahama.

But wait, Dear Reader, there is a very interesting story here. Which is that in the wake of the abrupt and “mysterious” demise of the Sitting-President John Evans Atta “Woyome” Mills, the then-Interim-President Mahama, by tradition and protocol, ought to have promptly moved into the official residence of the President of the Sovereign Democratic Republic of Ghana. Not surprisingly, however, and for some reasons best known to the Bole-Bamboi native, from the Akufo-Addo-created Savannah Region, himself, Kwame Gonja, as Mr. Mahama is also widely and popularly known in the country, decided to stay put. Some have even speculated that perhaps the latter was being haunted by the ghost of the foully liquidated recently deceased President Mills. At any rate, there is another strange and interesting twist to this story.

You see, Dear Reader, at the time that he demanded to be rewarded by the State and the Ghanaian taxpayer with the official residence of the Vice-President, the man who actually ought to have been occupying the residence in question was the now-late Vice-President Papa Kwesi Bekoe Amissah-Arthur, whose death has been equally shrouded in mystery and been speculated to have been mired in a modicum of lingering suspicion and foul play. At any rate, news of what appears to have been the illegal and unethical acquisition of several “peripheral” portions of the Achimota Forest Reserve by the late CEO of the Ghana Forestry Commission, may very well turn out to have been precedent-set by the key operatives of the previous Mahama-led regime of the National Democratic Congress.

Right now, the jury is still out, as it were, at least as of this writing, with the Minister of Lands and Natural Resources, Mr. Samuel Abu Jinapor, having announced that he is in the process of setting up an expert team of investigators to ascertain precisely the process by which the late Mr. Kwadwo Owusu-Afriyie and some of the latter’s relatives and associates came to own several parcels of lands statutorily integral to the Achimota Forest Reserve, long before the present Akufo-Addo Government decided to release some portions of the putatively prime Achimota Forest Reserve for public and individual-citizen use.

Arise Ghana demo: They're political elements not professiona...
43 minutes ago