Accra floods: I don’t blame citizens; it's leadership that is not working – KKD 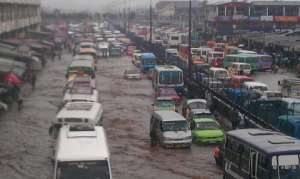 Veteran broadcaster, Kwasi Kyei Darkwah, popularly known as KKD has put blame on the doorsteps of leadership in the country for the perennial flooding in the capital.

Since last weekend several parts of the country, especially in the capital, Accra were flooded.

People’s homes were affected and some roads were rendered unusable for motorists.

Speaking on GTV on Wednesday, May 25, 2022, Kwasi Kyei Darkwah lamented the persisting problem whenever it rains, insisting that the citizenry cannot be blamed.

According to him, people in leadership have failed and it is about times those who are not performing are fired.

To address the age-old flooding issue, the Minister for Works and Housing, Hon. Asenso-Boakye has charged heads of Metropolitan, Municipal, and District Assemblies to ensure strict enforcement of planning and building laws to help mitigate the country’s problem.

“I urge you to support Governmental efforts by maintaining proper solid waste practices. I have called on MMDAs to strictly enforce planning and building laws to help mitigate flooding in the country,” Hon. Asenso-Boakye said as reported by the Ministry of Information.