NADMO and military move to rescue victims of Accra floods 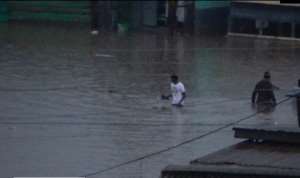 A joint team of military and the National Disaster Management Organisation (NADMO) has gone on a rescue mission after torrential rains hit the capital around 10:30 pm on Monday through to the early hours of Tuesday causing severe floods.

The Public Relations Officer for the National Disaster Management Organisation, George Ayisi in an interview on the CitiBreakfast Show, said his officers, together with others from the 48 Engineers Regiment of the Ghana Armed Forces have been deployed to some areas to manage the situation.

“We have deployed a team to Alajo, Tetegu STC junction, and Cantonments. At Cantonments, for instance, 48 Engineers team have also joined in.”

“Some people had been trapped in their homes, and so our men had to go and rescue them.”

He urged all individuals who find themselves in such situations to reach out to the organisation’s toll-free on 112 or call 0302964884.

“We work in partnership with stakeholder agencies such as GMet (Ghana Meteorological Agency) which gives us the updates, 48 Engineers, and the Ambulance service amongst others. We have had preparatory works, and simulation exercises towards some of these happenings. When anyone reaches out to us, we will contact and deploy our men to come to their aid.”

“For now, we are focusing on rescuing victims. When we are through with that, we will assess the situation and determine how we will go about providing relief items.”

Heavy rains, which started late Monday evening through to Tuesday morning, submerged parts of the capital city of Ghana, Accra.

This comes a few days after most parts of Accra got flooded after close to a 10-hour downpour on Saturday.

Monday's torrential rains started at different time intervals in different places in Accra. It began around 10:30 pm around Lapaz and neighbouring towns.

Residents in hard-hit areas such as Adabraka Sahara, had to abandon their homes to seek shelter elsewhere because the floodwaters entered their rooms.