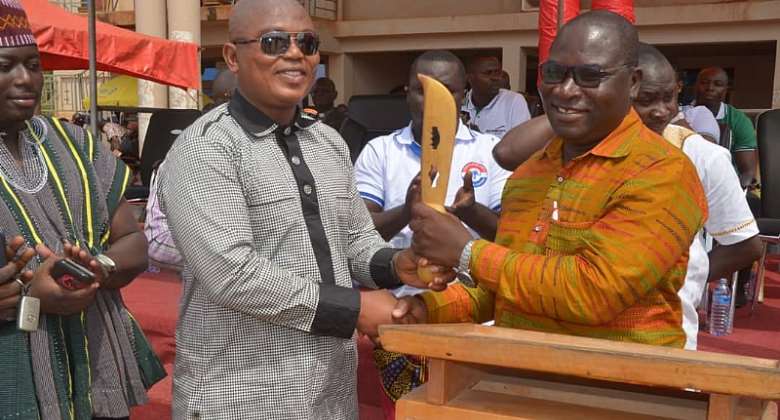 The New Patriotic Party (NPP) Grassroots Movement, an emerging youth group of the ruling NPP in the Ahafo Region has called on delegates to vote for Mr Robert Sarfo Mensah as the Ahafo Regional Chairman of the party.

The group said they believed voting for Mr Sarfo-Mensah, a former Member of Parliament (MP) for Asunafo North Constituency and popularly known as “Booba” was the only and best reward delegates could bestow him.

According to them, the party in the region ought to appreciate and recognised the sterling and exceptional contributions of Mr Sarfo-Mensah who had represented the constituency in parliament three consecutive times towards the growth and development of the NPP.

Addressing a news conference at Goaso, the Ahafo Regional capital, the group asked the delegates to ignore the political propaganda adopted by some of the party supporters to dent the hard won reputation and image of Mr Sarfo-Mensah to make him unpopular.

Flanked by other members of the Movement, Mr Ernest Opoku Gyamfi, the Convener explained the Movement was made up of NPP supporters, members and sympathisers at the grassroots was focused on ensuring that the NPP win Election 2024 and break the eight-year cycle in Ghana’s democratic governance.

He said though, the Movement was ready to work with all the aspirants who win the regional elections, it was imperative that they consider the proven track record, experience loyalty and hard work and vote for Mr Sarfo-Mensah to lead the party to victory in the next general election.

“His promise to a befitting NPP Regional Office for Ahafo and a solid database for the NPP youth in the region is in the right direction and we must all support him to achieve such a vision in the interest of our great party in the region”, Mr Gyamfi stated.

Mr Bismarck Sakyi, the interim local organiser of the Movement cautioned the delegates to be wary of some of the ambitious aspirants who had resorted to using money and gifts to influence them to obtain their votes.

“We should remember that if we are not guarded and take their monies, they would turnaround and recoup if they win the elections and that would not augur well for us as a party”, he indicated.

In a related development, Mr Sarfo-Mensah has called for free, fair and credible regional elections to strengthen peace and unity in the party in the region.

Speaking in an interview with newsmen, he said the NPP remained a “solid party under a great elephant”, hence the need to ensure a transparent electoral process.

Mr Sarfo-Mensah said he was optimistic that he would win the regional chairmanship position, to enable him to build and strengthen government-party relationship, as well as galvanise NPP supporters in the region for a vigorous electioneering to win the general election.

“My vision is to build the capacity of foot soldiers, run transparent administration, facilitate and establish effective and efficient communication channels, establish strong research unit and a reliable database for the youth in the party”, he said.

Mr Sarfo-Mensah said a strong and reliable database was needed for the NPP to provide opportunities for party faithful and loyalists to study abroad, as well as create jobs for those at the grassroots level.

“If we are able to build the human resources of our youth, they would come back and invest in the party which would be for our own good. In fact, we have to get a more proactive agenda setters, with intellectual capacities to manage the party at the local levels”, he added.