Crisis in Ukraine has compromised food security of Africa — Akufo-Addo 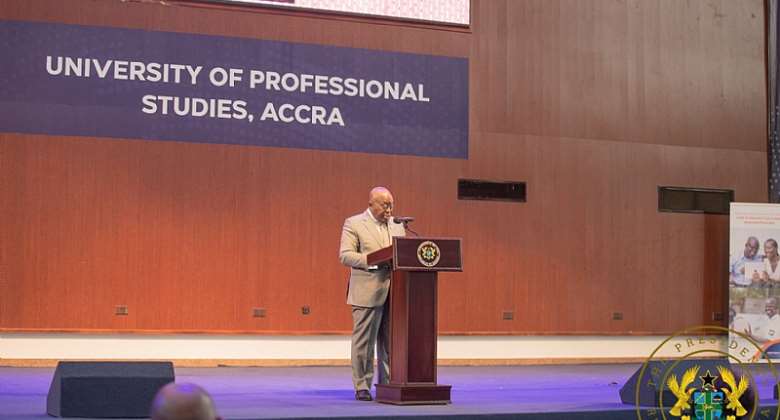 President Nana Addo Dankwa Akufo-Addo has said Africa is the best endowed continent in the world.

The continent, he said, is the richest one by all standards, and yet, unfortunately, the mass of her people, in the midst abundance, are the poorest on the planet.

He added that Africa is dependent on the charitable spirit of less endowed countries from other continents for the survival of its economies and its peoples.

Africa's economic and foreign policies have been substantially defined by aid, with most national budgets heavily dependent on it. We are not disclaiming aid, but we do want to discard a mind-set of dependency – it is, as we have seen, unhealthy for both the giver and the receiver.

Speaking at the opening ceremony of the 22nd academy of African Business and Development conference, at the university of professional studies , Accra on Wednesday may 18, 2022, mr Akufo-Addo said “It is becoming increasingly apparent that Africa must enhance her efforts at self-sustenance, and move to a situation beyond aid. The United Nations provides the world with a global framework, based on the attainment of the 2030 Sustainable Development Goals , for addressing the challenges we face. I am also convinced that, to develop and do so sustainably, Africa must look inward. I am by no means saying there is no longer a place for aid in Africa, or that we should disregard what aid has done for us in the past.

“Neither am I saying that more advanced countries should cease honoring their aid commitments to African countries, or that we should turn our back on investments from outside. I am saying that African countries need to engage more closely, deeply, and competitively through trade, investments, political cooperation, and enhanced regional initiatives in peace and security. Together, African countries need to build our continent by building upon our strengths and holding each other up. Then, and only then, can we grow organically, by wielding greater negotiating power to develop the continent of Africa.

“For a continent that has made the choice of pursuing integration, we have not done much as we should have in liberalising and promoting trade amongst ourselves. Research has shown that countries or groups of countries with the largest share of world trade are located within regions with the highest share of intra-regional trade. Trade between African nations remains low compared to other parts of the world. In 2000, intra-regional trade accounted for 10% of Africa's total trade, and increased to 16% in 2015. Intra-regional trading in 2015, for example, amongst members of the European Union, amounted to 70%, stood at 52% amongst the nations of Asia, and 50% amongst the nations of North America. Indeed, all of the shocks we are experiencing, as a result of COVID and the Russian invasion of Ukraine, may have been felt less if Africa's focus had shifted sooner from dependence on aid to a focus on production, productivity, intra-continental trade, and exports, instead of imports.”

He added that in 2020, Africa imported some four billion dollars ($4 billion) worth of agricultural products from Russia, ninety percent (90%) of them being wheat and six percent (6%) sunflower oil.

“What stops an African country, like Ghana, from producing and consuming its own tropical oils, like palm and coconut oil, and trading them with Morocco which produces wheat? Africa can and should be self-sufficient.

“Ghana's chicken imports, in 2021, were estimated at some three hundred and fifty metric tons (350,000 mt), with forecasts for 2022 being four hundred thousand metric tons (400,000 mt,) fourteen percent (14%) more than the 2021 imports. None of these imports, ironically, are from African countries. South Africa imports almost one billion dollars ($1 billion) worth of wheat, rice, frozen meat products, and corn per annum, none of which are from any African country. These are the reasons why intra-Africa trade is so low. We contribute to the development of other nations any time we import toothpicks rather than manufacturing them in our own country.

The crisis in Ukraine has compromised the food security of Africa not only by the disruption of commodity imports, but also by the unavailability of fertilizer for our crops. Growing concerns over fertilizer shortages in most African countries, including Ghana, are worrying. Ghana's maize and soya production will be affected, and our poultry industry will suffer greater shocks. The current derangement in the global commodities market, supply chains, and logistics should represent a clarion call for Africa to rise up and stand on her own feet.

“A powerful lever for the transformation of Africa's economies and food systems is the African Continental Free Trade Area (AfCFTA), which came into effect on 1 January 2021. The AfCFTA, whose Secretariat is located here in Accra, links fifty-four (54) markets, covering 1.2 billion people, with a combined GDP of three trillion United States dollars ($3 trillion), into a single market.

“It is the world's largest free trade area outside of the World Trade Organisation (WTO) itself. By 2050, it will cover an estimated 2.5 billion people, and have over a quarter of the world's working age population. One in four people on the planet will be an African. Africans must take advantage of this historic opportunity that the AfCFTA presents, as it provides both the impetus and catalyst for much-needed sustainable development.

“The time to pursue a path to prosperity and self-respect for our nations and our continent is NOW. The concept of Africa Beyond Aid is about acknowledging that we must develop in a sustainable manner, recognizing that we must take the bull by the horns, and take responsibility for our sustainable growth, while perceiving our fellow African countries as key stakeholders in our own development.

“We seem to have missed out on a lot of opportunities to make Africa the continent she deserves to be – rich and resilient. But it is not too late to right the wrongs. It is time to catch up now. It is time to create the future we want for our continent, and it is time to start building that future, inspired by the imperative to transform our economies from raw material producing and exporting economies to value.”