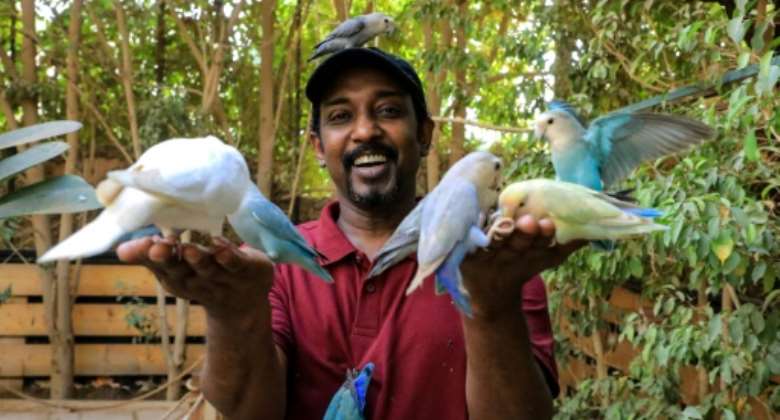 Tucked away east of Sudan's capital Khartoum, a sanctuary of lush green vegetation has been a haven for dozens of exotic birds from far and wide.

"I have a passion for birds," said Akram Yehia, owner of the Marshall Nature Reserve which covers 400 square metres (4,300 square feet).

"I wanted to create an ideal environment that simulates their natural habitat."

Yehia, 45, set up the huge caged aviary in his house's front yard four years ago, and has handcrafted dozens of birdhouses.

He created a habitat of trees, adding a garden pond and mist nozzles for cooling off against Sudan's scorching heat.

Over 100 birds of 13 different species currently inhabit the reserve.

Ring-necked parakeet, rosella birds, as well as Meyers and red-rumped parrots flit across branches and compete over birdhouses in the reserve.

"I have trained and tamed them over the years so they won't attack each another," he said.

Yehia says his favourite is an African grey parrot who answers to the name "Kuku" and has a knack for mimicking human sounds and movements as well.

Sudanese and foreign visitors are allowed to drop in for two to three hours a day only.

"It's only limited time so we don't disturb their habitat," said Yehia.

Business, however, has been impacted since an October military coup that has triggered regular mass protests met by a violent crackdown.

Visits often get called off on protest days as streets are blocked, making it hard to move around the capital.

"The tear gas fired during the protests is very dangerous for the birds," Yehia said.

"I know people living closer to large protest sites and who've lost all the birds they own."

Yehia has also been grappling with increasing expenses in Sudan, where the local currency has plummeted against the dollar, and food and fuel prices have soared.

"I want to expand the reserve but it's very expensive now," he said.

To visitors, the reserve is a welcome break from the hustle and bustle of Khartoum.

"I never knew that such a place exists in Khartoum," said Anna Shcherbakova, a visitor from Ukraine.

A local visitor, Hossameddine Sidahmed, said he hopes the reserve expands and grows "even more beautiful".