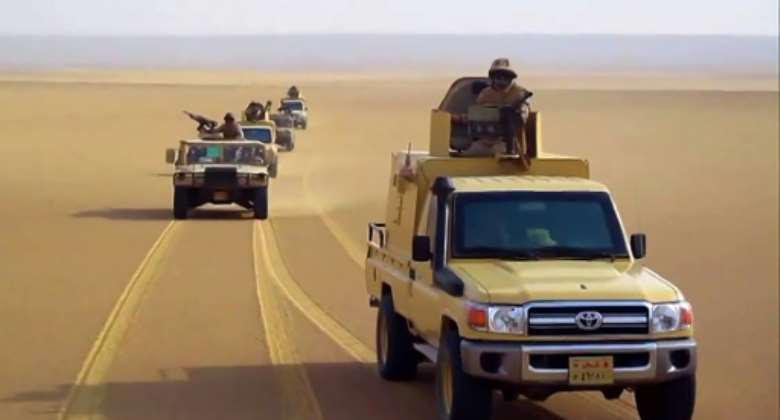 An image grab taken from a handout video released by the official Facebook page of Egypt's Military Spokesman on December 8, 2020 shows an Egyptian army trucks in the desert. By - (EGYPTIAN DEFENCE MINISTRY/AFP)

Five Egyptian soldiers and seven jihadists were killed early Wednesday when the army was attacked in the Sinai region, the military said, the second such deadly attack in days.

There was no immediate claim of responsibility for Wednesday's attack, which was announced by the military as Egypt's President Abdel Fattah al-Sisi met with US National Security Advisor Jake Sullivan.

But it came four days after an ambush on the Sinai Peninsula claimed by the Islamic State group killed 11 Egyptian soldiers, the military's highest loss of life in years.

The military said Saturday's "terrorist" attack was against a water pumping station.

IS claimed responsibility the following day, announcing on its Amaq propaganda site that it seized the weapons of soldiers it killed and torched a military post.

Egypt's Sinai Peninsula has been gripped for more than a decade by an armed insurgency, which peaked after the ouster of late Islamist president Mohammed Morsi in 2013.

The army and police in February 2018 launched a vast "counter-terror" operation in Sinai against radical cells that had pledged allegiance to IS.

Security forces have also fought radical insurgents in the western desert, between the Nile valley and the border with Libya.

More than a thousand suspected militants and dozens of security personnel have been killed since the start of operations, according to official figures.

In the Sinai, attacks against the military focus in large part on oil and gas pipelines that supply Israel and Jordan.

Attacks against the capital Cairo are relatively rare.

In August 2019, around 20 were killed when an explosives packed car rammed into three other vehicles, three months after a jihadist attack at the Giza pyramids wounded 17.

In April 2020, an Egyptian policeman was killed and three others wounded in a shootout in the capital, according to authorities, in a clash that killed seven members of a "terrorist cell" who were allegedly planning Easter attacks against Coptic Orthodox Christians.

Human Rights Watch has accused both the Egyptian security forces and insurgents of committing "war crimes" in North Sinai.