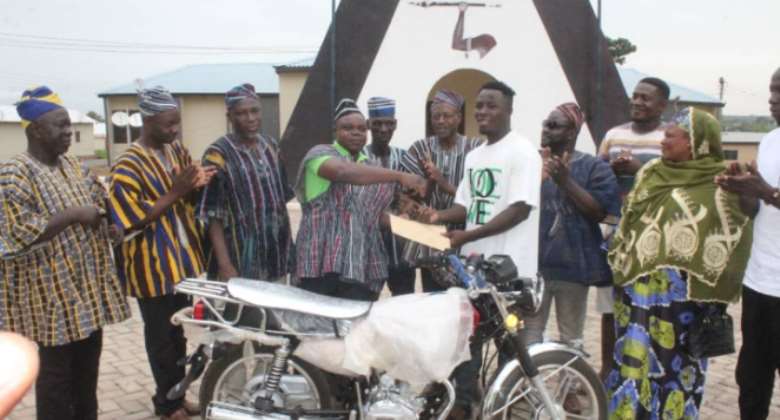 Organizers of Savannah Region's wrestling known as "Shea Wrestling Gh" have on Saturday May 7, in a unanimous decision, declared Alhassan Abubakari also known as Nakpalawura as winner of its maiden edition after his competitor opted out of the finale.

The energetic and fierce wrestler who represented Sawla-Tuna-Kalba District in the local wrestling competition, was awarded a brand new motorbike for his superlative performance which took him to the grand finale.

The competition was expected to be climaxed two months ago at the 46th annual congress of the Gonjaland Youth Association which was held at Daboya in the North Gonja District of the Savannah Region but suffered a setback.

After several deliberations, organizers of the local bout arrived at a decision to hold the grand finale at Damongo on Saturday May 7 which was expected to draw a mammoth crowd but Bayis Akati who represented North Gonja District pulled out citing personal reasons.

Speaking to pressmen after receiving the coveted prize, Nakpalawura expressed gratitude to the organizers for the bold decision and urged them not to renege in their strive to make the bout a national event.

He also asked his peers to consider wrestling as a profession than resorting to illegal ways of making money.

Lead Coordinator for Shea Wrestling Gh, Mr. Mufti Borejinkpr Habib expressed delight with the level of love and support the people of the Savannah Region have shown in the wrestling competition.

He poured out his affection for the good performance of the wrestlers.

Linguist to the King and Overlord of the Gonja Kingdom, Alhaji Afuli Losina who presented the prize to Nakpalawura, commended him for winning the coveted spot and impressed on him to stay away from drugs and alcohol to remain fit for the upcoming inter regional bout slated for November this year.