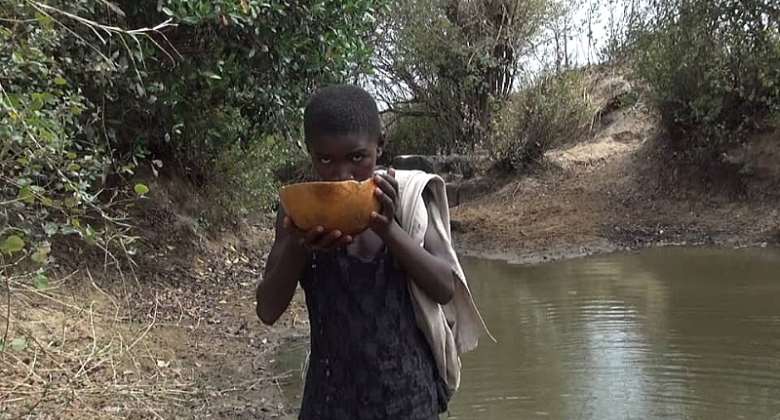 Ninonteng is one of the communities located in the Wa West District in the Upper West Region of Ghana. The community which has a population of a little over 300 people for the past decades have no access to portable water source to support their domestic activities.

Intriguingly, government upon government has allowed the people of Ninonteng to their faith, leaving them wonder and share water with animals and subjected to inhuman treatments. The community competes with animals as they share the only polluted dug-out with them. It is a pity and disheartening to see women walk to the dugout to fetch water or enable their young children to drink from the unprotected green water source.

In a time when the global community is advocating for the need of portable water sources and improved sanitation in our world, rural communities including Ninonteng cannot be left behind.

More worrying is the fact that the government of Ghana has promised water for all; such a bold declaration should not be rhetoric but rather backed with pragmatic actions to resolve such a development gap in our country.

The sad reality is that residents of Ninonteng are in the breaks of contracting water-related and water-borne diseases if serious actions are not taken to ensure that they have access to a portable water source.

The story of Ninonteng is just a case of some communities in the Upper West Region including Wherkaaba which is still suffering from the same plights.

It was also gathered that the residents of Ninonteng have written several letters to the Wa West District Assembly and followed politicians to help mitigate their sorry state of haven to drink from polluted sources and to no avail.

In furtherance of this, I charged the government and other CSOs to see the issue in Ninonteng as a public health alert, since an outbreak could be imminent.

The Chief Executive Officer (CEO) of Ideapath Consult who is has been intensifying advocacy to mobilize support or identify actors to address these developmental problems, has commended two development actors who read the story of Daripuzuo and came to their aid, he hopes Allah will touch the heart of some Samaritans to help address the issues of Ninonteng.

Going to the IMF with Ken Ofori-Atta as the lead will yield ...
18 minutes ago