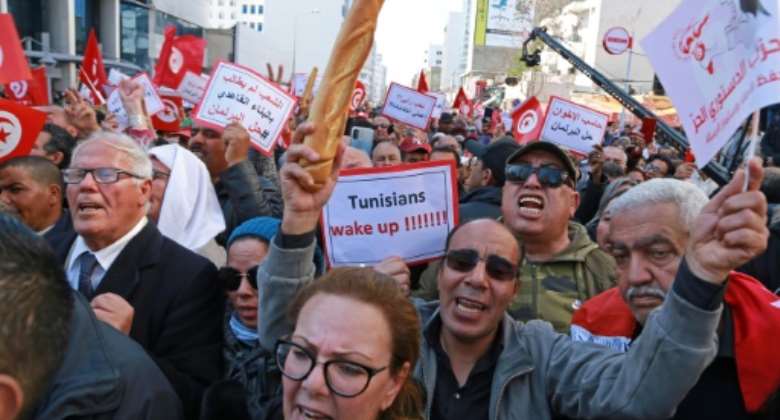 Tunisian opposition supporters take part in a rally against President Kais Saied's power grab and the economic crisis in Tunis on March 13, 2022. By Anis MILI (AFP/File)

Testifying to Congress, the top US diplomat voiced concern about power-grabbing by President Kais Saied and said "at the very least" Tunisia needed to go ahead with parliamentary elections promised by the end of the year.

"I think the most important thing that need to do is to make themselves fully eligible for support from the international financial institutions," Blinken told the House Appropriations Committee.

"What's happened now has gotten them off track on that," he said.

"We've been making clear that our support can be there, but we need to see Tunisia return to the track that it was on."

Tunisia has been seeking a loan package from the International Monetary Fund, in which the United States is the largest stakeholder, as it copes with an economic crisis aggravated by the Covid pandemic.

Saied, who was elected in 2019, sacked the government last year and has since given himself the power to name the head of the country's electoral authority.

President Joe Biden's administration has stepped up criticism of Saied after initially hoping for a quick resolution of the political troubles in Tunisia, birthplace of the Arab Spring.

US lawmakers have pressed Biden to take stronger action including shutting down a nearly $500 million aid package under the Millennium Challenge Corporation, which is eligible for countries that respect democratic governance.