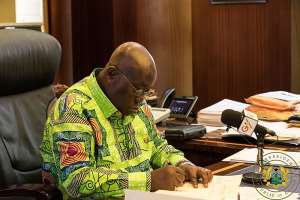 The President of the Republic, H.E Nana Addo Dankwa Akufo-Addo has assented to the Electronic Transaction Levy (E-Levy) bill.

Modernghana News can report that the President has signed the bill into law on Thursday, March 31, 2022.

Following the latest development, the implementation of the controversial levy will take off on May 1, 2022, as disclosed by the Minister in charge of Finance, Hon. Ken Ofori-Atta.

Reacting to the news of the President assenting to the E-Levy in an interview on Asempa FM’s ‘Ekosii sen’ programme this afternoon, North Tongu Member of Parliament (MP) Samuel Okudzeto Ablakwa said it is of no significance.

“It’s not significant. It makes no difference and he [President Akufo-Addo] knows,” Mr. Ablakwa stated.

According to him, the passage of the E-levy is a sham, bogus, of no effect and it won't go anywhere.

“The passage of the E-levy bill without 138 MPs is contemptuous and disrespectful to the Supreme Court.

“We're going to the Supreme Court for enforcement. We want the court to help enforce its own ruling,” the North Tongu MP added.

Latest Photo Reports
Catch up with all the political quotes from our politicians.
Advertise here
More from Headlines
ModernGhana Links
Ghana would have gone to IMF even without the Covid pandemic, Russia-Ukraine war – Ato Forson
Gov’t decision to run to IMF outrageous, offensive – CFF-Ghana
Gov’t turning from E-Levy to IMF is a display of try and error, policy uncertainty – Prof. Lord Mensah
TOP STORIES

The Problem of Presidential Travels and the IMF
16 minutes ago