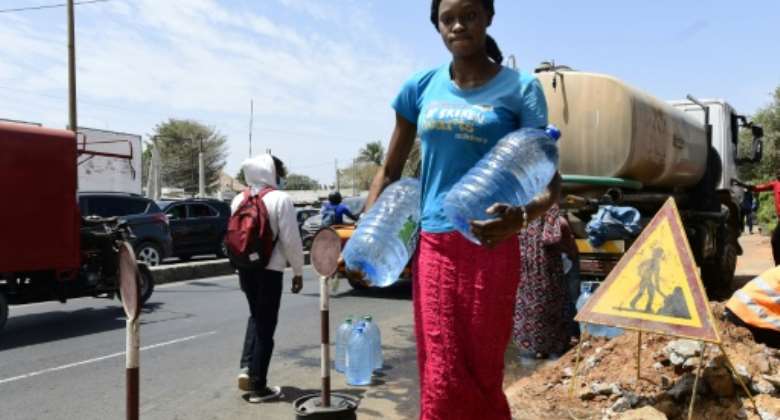 A population boom in Senegal is intensifying pressure on scarce water resources. By SEYLLOU (AFP)

Many residents of the Senegalese metropolis Dakar get up in the middle of the night hoping to collect water from their taps, which mostly run dry.

"We wake up at 4 or 5 am to get water, says Sidy Fall, 44, in her kitchen in a working-class neighbourhood, filled with large bottles of stored water.

If she doesn't get up in time, the water often runs out by 5:30 am. Fall's taps are sometimes dry for two or three days at a time.

A population boom in Senegal is intensifying pressure on scarce water resources in its semi-arid capital of five million people, with problems set to increase over the coming decades.

This is common to many African cities, where infrastructure investments have lagged behind strong demographics and demand for water from industry and agriculture.

In Dakar, a recent World Bank report pointed to poor water management as part of the reason for shortages, along with overexploitation and groundwater pollution.

But demand for water has kept increasing too, sending municipal officials racing to improve infrastructure to secure supply.

Half of all households in the suburb have problems with water, she said.

"We have a population that has exploded, urban planning schemes that have not been respected," Diouf added, predicting that the problem would get worse.

A recent World Bank report pointed to poor water management as part of the reason for shortages. By SEYLLOU (AFP)

About a third of Senegal's population of 17 million people lives in the Dakar region, which is also the country's economic nerve centre.

But there are myriad complications tied to the runaway expansion. The sewage system is often lacking, and parts of Dakar routinely flood during the rainy season.

Diouf said water cuts are a problem "all year round".

Senegal's government, for its part, said 99 percent of urbanites and 91 percent of rural dwellers had access to water.

The authorities are pushing to remedy supply issues in the capital and the government says it has made considerable infrastructure investments.

Dakar is supplied by four plants that pump water from a lake some 250 kilometres (155 miles) north of the city -- as well as from over-exploited aquifers.

The fourth plant came online last year: Ngom said it would produce 200,000 cubic metres per day by the end of 2022 -- which would guarantee Dakar's water supply until 2026.

The government argues it has made considerable infrastructure investments. By SEYLLOU (AFP)

Sones is also building a desalination plant on the Dakar coastline, due to open in 2024.

While Dakar residents are quick to blame the government, national consumer association president Momar Ndao concedes there have been improvements.

Often water is only available on ground floors, however, and consumers are increasingly complaining about exorbitant prices, he added.

Sen'eau, a private firm that has managed Dakar's water on behalf of the state since 2020, argues it is not to blame for recurrent shortages.

The firm -- in which French utility company Suez has a 45-percent stake -- is the target of broad popular frustration.

But Diery Ba, a Sen'eau director, said the company had inherited crumbling water infrastructure, which it has set about improving.

"Almost no neighbourhood had water 24 hours a day," he said.

While upgrades to the network had led to water cuts, this "adjustment period" was coming to an end, he added.

Higher bills were also a result of consumers simply consuming more water than they once did, he said.

According to the World Bank, Senegalese water consumption is due to increase between 30 and 60 percent by 2035.