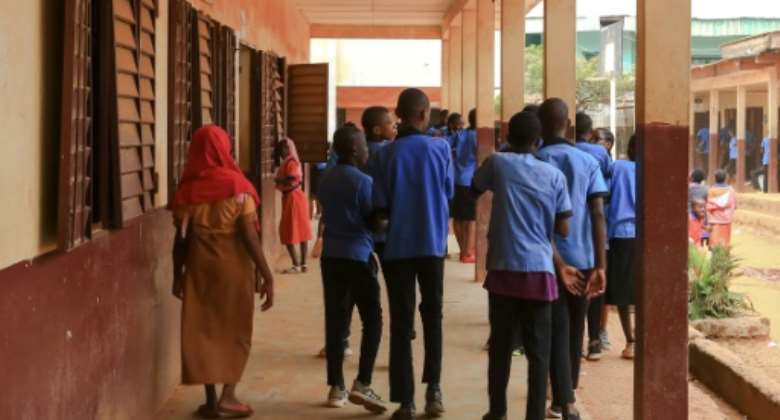 Students at the Tsinga Bilingual High School in Yaounde. Not all school pupils are getting taught at the moment. By - (AFP)

Four students sit on a bench playing a game on a smartphone. They have little else to do -- their school in the western town of Nkonsamgba is almost deserted, for their teachers are on strike.

High-school teachers in many parts of the west-central African country are refusing to work, accusing the government of failing to stump up hundreds of millions of dollars in owed pay.

Their stand has touched a national nerve and now threatens to spread to primary schools and other parts of the public sector, such as health and transport.

"Money in your pocket, chalk in your hand," is the campaign message being emblazoned on posters in schools and on social networks.

The strike has already "caused significant disruption to the school year and a major dysfunction in our education system," government spokesman Rene Emmanuel Sadi said last week, admitting that "most of the demands are legitimate".

Many high-school teachers say they have not been paid, or only received part of their salary, for months or even years.

The strike was launched on February 21 by a campaign group called OTS -- an acronym standing for the French words meaning "We have put up with too much."

According to OTS, the strike "is being generally followed" among the country's more than 90,000 high school teachers, "although it is not 100 percent". The government has not given a figure.

The strikers are demanding that the government of President Paul Biya, who has been in power for nearly 40 years, hand over salary arrears totalling 181 billion CFA francs, or roughly $300 million.

Under Cameroon's education system, newly graduated teachers are assigned to a high school but not paid immediately.

After a while, the teacher eventually receives two-thirds of the official salary, or 130,000 CFA francs ($220) per month, although it can sometimes be a long time before the payment starts.

The salary remains at this level until he or she is officially classified a civil servant, a status with given rights and benefits. And that too is a process that can take far too long, OTS member Thierry Makon told AFP.

Once a teacher is anointed as a civil servant, the state is supposed to cough up the one-third of the salary that is owed.

But "often a bribe has to be paid, of up to 30 percent" of the arrears, OTS campaigner Hubert Lipem II said.

One of the strikers, Ulrich Tadie, explained what happened in his case.

Tadie was assigned to a high school in Nkonsamgba three years ago.

"I received my first two-thirds salary a year later" and the state has still not paid the arrears, the young computer science teacher said.

The strike gained traction among the public with the tale of a frail sports teacher called "Mr. Hamidou," who said he had worked for a decade without being paid.

He died of an illness on March 8, just a couple of days after the government announced he had gained the coveted civil servant status.

Biya has ordered the release of 2.7 billion CFA francs to teachers, but only to cover the costs of marking exams.

He has also ordered the payment from March of a catchup salary to those who have been receiving two-thirds of their pay and promised the "gradual settlement" of everyone's arrears.

The OTS has deemed those measures unsatisfactory and called for the strike to continue.

Out of a class of 38 students at the Nlonako de Nkonsamgba high school, only two students had bothered to show up when AFP visited.

"This strike is penalising us, we've got our exams this year," said one of them, Laure.

Elsewhere in the country, teachers may be in class but many are not teaching or have been replaced by temporary staff.

Some parents are frustrated. "I am sad. We are paying out money for our children," said Joseph Bioche, a parent in Manengole, near Nkonsamgba.

School fees and other costs can be very high in a country where according to the World Bank, more than one in four people live below the extreme poverty line (less than US$1.90 a day).

In Cameroon secondary schools the enrolment rate was only 49 percent for boys ad 43 percent for girls in 2016, according to UNESCO.

Akufo-Addo going to IMF is not victory, it's a day of sadnes...
46 minutes ago