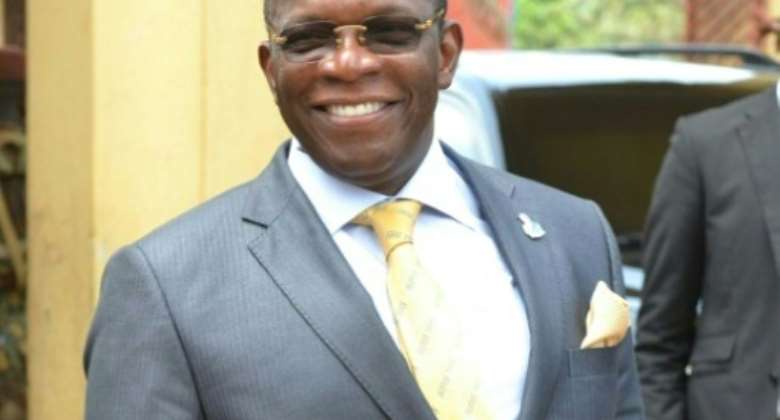 Ibrahima Kassory Fofana poses for a picture in Conakry on October 5, 2015. By CELLOU BINANI (AFP/File)

The party of Guinean president AlphaConde, who was overthrown last year, has appointed a temporary leader, sources close to the organisation told AFP on Tuesday.

Senior figures in the Rally of the Guinean People (RPG) selected Ibrahima Kassory Fofana to head a provisional executive council until a full party conference can be held.

The arrangement was confirmed by a senior official and outlined in an internal document seen by AFP.

The party has staged very few conferences, but the move has Conde's support, said a former minister who asked not to be named.

It virtually ensures Fofana will take over the leadership, the source said.

Conde, 84, was ousted in a military coup last September following a wave of anger over his plans to secure a third presidential term.

Opponents accused him of manoeuvering to sidestep the constitution's two-term presidency limits.

Fofana is a Conde loyalist who served under him as from May 2018 until the coup.

Fofana's time in office coincided with the crisis sparked by Conde's decision to amend the constitution, a move that enabled him to run for and win a third term in 2020.

Fofana's appointment as RPG leader would signal a further shift away from Conde who ruled the country of 13 million people for 10 years.

Fofana is from the Soussou community and would be expected to see an end to the years of domination by Conde's strong Malinke connections.

"The RPG must set an example to all Guineans and show it is not a single ethnic group party," the former minister said.

Fofana had not replied by Tuesday afternoon to AFP's calls.

Coup leader Colonel Mamady Doumbouya -- who was later declared interim president -- has promised to restore civilian rule after a transitional period, but has so far resisted international pressure to commit to a date.

Several RPG officials face inquiries over their period in power and Fofana himself was questioned last week by investigators. The party is reportedly struggling financially.

Conde has distanced himself from the RPG.

The junta authorised him in January to leave the impoverished but mineral-rich nation for medical treatment in the United Arab Emirates at a time when the investigations were opening into crimes allegedly committed during his tenure.