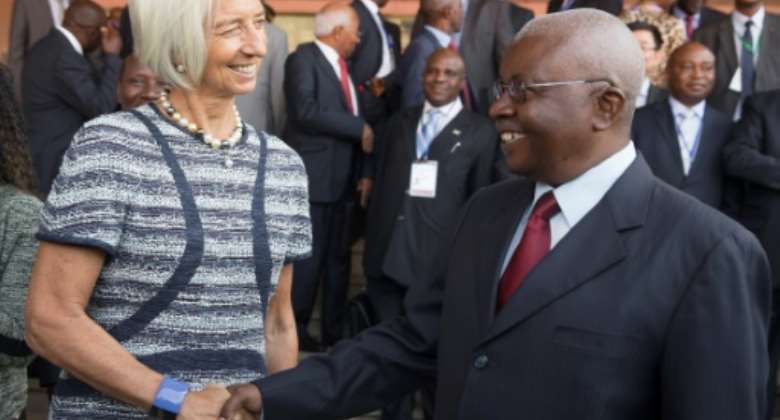 Before the storm: The then head of the IMF, Christine Lagarde, is greeted by Guebuza in Maputo in May 2014. By STEPHEN JAFFE (IMF/AFP/File)

Ex-president Armando Guebuza was on Thursday expected to testify in Mozambique's biggest corruption scandal, an affair concerning secret loans contracted under his tenure that triggered an economic crisis.

The country, ranked among the poorest in the world, illicitly borrowed $2 billion (1.76 billion euros) in 2013 and 2014 from international banks to buy a tuna-fishing fleet and surveillance vessels.

The government masked the loans from the country's parliament.

However, the "hidden debt" finally surfaced in 2016, prompting donors including the International Monetary Fund (IMF) cut off financial support.

An independent audit later found $500 million had been diverted and remains unaccounted for.

The 79-year-old former leader, who will be the most high-ranking witness in the scandal, was president between 2005 and 2015.

His eldest son Ndambi is among 19 high-profile defendants facing trial over alleged links to the case. He was arrested in February 2019 and has been in detention since then.

Last year Ndambi denied charges he took bribes to persuade his father to approve the maritime deal and facilitate the secret loan.

When the debt scandal surfaced, the IMF and other donors cut off financial support, triggering sovereign debt default and currency collapse.

The trial is being held at a special court set up at a high security prison in the capital Maputo.

Finance Minister Adriano Maleiane last week told the court that his predecessor had covered up the debts.