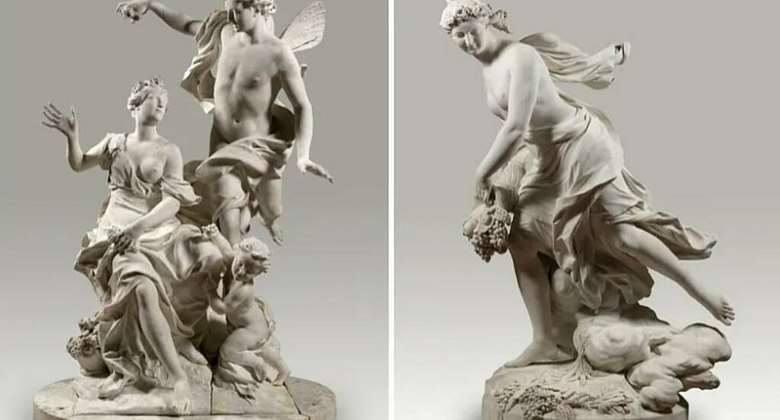 Two 18th century French sculptures commissioned by kings Louis XIV and Louis XV, which had been lost for decades, have returned to their place of origin thanks to Angola.

Zephyr, Flore et l'Amour – by artists Philippe Bertrand, René Firmin and Jacques Rousseau – was commissioned by Louis XIV for the gardens of the Grand Trianon. While Louis XV commissioned Abondance, a major work sculpted by Lambert Sigisbert Adam between 1753 and 1758, for his residence in Choisy.

Dispersed during the French Revolution, the works were acquired in 1881 by brothers Alphonse and Edmond de Rothschild for their iconic Parisian hotel on the rue de Saint-Florentin.

The sculptures were looted during the Nazi occupation, but returned to the family after the war and placed in the garden of the Ephrussi de Rothschild Hotel.

In 1979 the Angolan embassy took up residency there and by law also took ownership of the sculptures.

They were then somewhat forgotten until 2018 when a curator from the Chateau de Versailles traced and identified them.

A gift from Angola

Given the historic and artistic value of the works, Angola decided to donate them to France. They will join the collections of the National Museum of the Chateaux of Versailles and Trianon.

Receiving the donation in an official ceremony on 4 February at Versailles, Culture Minister Roselyne Bachelot said it was a “historic moment that shows the quality of French-Angolan relations".

Her Angolan counterpart Filipe Zau said: "As of today, these works, which are such an important part of France's heritage, are returning to their place of origin."

Countries have an "indisputable right" to enjoy their own heritage, Zau said, adding that "a people's identity is its greatest guarantee of sovereignty".

This was the first agreement on cultural cooperation between the two countries, and the date had special relevance.

"The 4th of February marks the beginning of the armed struggle against the Portuguese colonial administration, and also marks the deepening of relations between Angola and France," said Zau.

The sculptures are now on show at the "Masterpieces Rediscovered" exhibition at the Chateau de Versailles.