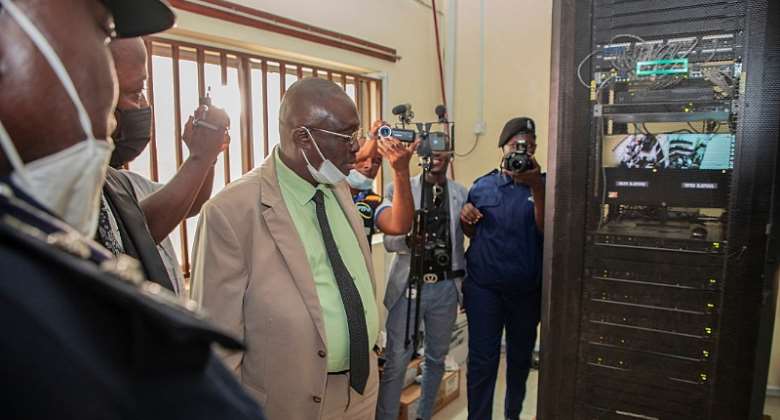 The government of the Republic of Sierra Leone represented by its Chief Minister Mr. Jacob Jusu Saffa, has inaugurated the National Crime Management System-West African Police Information System (NCMS-WAPIS) Data Collection and Registration Centre on 27 January 2022 at the CID Headquarters in Freetown.

The ceremony was also attended by Government officials, the Head of the Political section of the European Union Delegation in Freetown as well as the Head of INTERPOL WAPIS Programme and various Heads of Law enforcement officials and Representatives of embassies from ECOWAS and EU Member States based in Sierra Leone.

The NCMS-WAPIS Centre is a Data Collection and Registration Centre that will operationalize the WAPIS System in Sierra Leone.

The West African Police Information System (WAPIS) is an initiative of West African countries under ECOWAS, aimed at building an effective national, regional and international response to national, regional and international criminal threats, including transnational organised crime and terrorism. The objective of the WAPIS System is to enhance the capacity of Law enforcement agencies of West African countries to fight these criminal threats effectively, by improving their capacities to collect, process and analyse information, and to share information among national security bodies and with other countries in the region and beyond through INTERPOL.

The WAPIS System is supported by a multiannual Programme (2012-2022) funded by the European Union and implemented by INTERPOL, with the political and strategic support of ECOWAS. The fifteen (15) ECOWAS countries benefiting from INTERPOL’s WAPIS Programme are: Benin, Burkina Faso, Cabo Verde, Côte d'Ivoire, Gambia, Ghana, Guinea, Guinea-Bissau, Liberia, Mali, Niger, Nigeria, Senegal, Sierra Leone, and Togo. Two non-ECOWAS countries, Mauritania and Tchad, are also covered by the WAPIS Programme. The Memorandum of Understanding between the Government of Sierra Leone and INTERPOL for the operationalization of WAPIS was signed 3 years ago, in January 2019.

The WAPIS system is used at three levels: national, regional and global:

The Data Collection and Registration center inaugurated today is a capital step in the establishment of a WAPIS system in Sierra Leone that will improve the country’s capacity to respond to national, regional and international criminal threats, including transnational organised crime and terrorism, effectively. The centre will bring together all security and law enforcement bodies in the process to collect, centralise, manage and analyse data from criminal cases in digital format, sharing this information electronically among national law enforcement bodies and with other countries in the region and INTERPOL. It will serve as a catalyst for security integration and interagency collaboration in the country, by bringing together all the security apparatus into the process of collection, storage and sharing of criminal data at national, regional and global level. The center will promote the sharing of criminal data in real time, thereby supporting the investigation of major crimes and the frontline officers in dealing with the movement of persons and goods at the border crossing points. The WAPIS Programme will see the creation of national police data systems in each ECOWAS Member State, Mauritania and Chad, together with the development of a regional platform for stronger police data exchange.

Opening the Inauguration ceremony, the Inspector General of Police Dr. Ambrose Michael Sovula Assured the participants that the effective functioning of the WAPIS system is high among the priorities for the Sierra Leone Police and that all partners are assured of the organization’s unwavering commitment in this regard.

Recognizing the political and operational involvement of the government of Sierra Leone, the Head of the WAPIS Programme, Mr. Richard GOTWE thanked the participants for honoring the invitation and stated that INTERPOL will increase the number of WAPIS workstations both in the WAPIS Center and in the whole network of police stations in the country in order to use it at its maximum potential. He outlined the actions envisaged by the WAPIS Programme as follows: the connection of the I-24/7 secure global police communication system, which will allow the Sierra Leone Law Enforcement outfits working with the WAPIS System to check in real-time, world-wide police data hosted by INTERPOL.

The Head of the Political Section of the European Union Delegation, Juan Antonio Frutos, stressed: “Transnational threats and challenges do not stop at borders, and therefore, cannot be effectively tackled by one State alone. They need a joint, coordinated international, regional and national response.”

Mr. Frutos added: “We commend the Sierra Leonean authorities and law enforcement bodies, for their active support in the implementation of the WAPIS Programme in Sierra Leone and the creation of this DACORE Centre. However, this is only the first step. We encourage the Sierra Leonean authorities to keep this WAPIS system as a priority of the National Security Strategy, and to take steps to ensure the sustainability of the WAPIS system, in particular to:

Concluding the remarks, the Chief Minister noted that the WAPIS Programme is timely as it will immensely boost the efforts of regional and global security cooperation against insecurity caused by threats from the transnational organized criminal networks including maritime crimes like piracy and other illicit activities at sea off the coast of West Africa and more extensively the Gulf of Guinea.

Under the WAPIS Programme, a training session on the use of the WAPIS System was organized and 50 persons were trained from the participating agencies, which was followed by the deployment and installation of workstations at the premises of various law enforcement agencies, including Police, Immigration and Anti-Corruption Commission.

The NCMS-WAPIS Centre in Sierra Leone is the ninth (9th) operational WAPIS Data center in West Africa, after Benin, Burkina Faso, Ghana, Mali, Mauritania, Niger, Nigeria and The Gambia. More inaugurations are planned in the coming months in other West African countries.

For more info on WAPIS: https://www.raosupportcellecowas.com/post/west-africa-police-information-system-3-wapis-3-edf-1