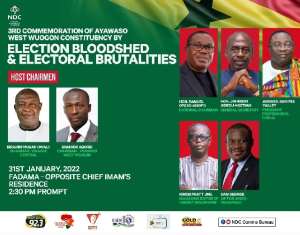 The National Democratic Congress (NDC) will, on Monday, January 31, 2022, mark the third anniversary of the Ayawaso West Wuogon by-election violence.

According to the NDC, this year’s commemoration is dedicated to the victims of the violence.

The NDC, in a statement dated Thursday, January 27, 2022, and signed by Bismark Aborbi, the Chairman of the Local Organising Committee, said the commemoration will be at Fadama in the Okaikoi Central Constituency of the Greater Accra Region.

The speakers at the event will include the National Chairman of the party, Mr. Samuel Ofosu-Ampofo; the General Secretary, Mr. Johnson Asiedu Nketia; President of the Professional Forum, Ambassador Sam Pee Yalley; Managing Editor of the Insight newspaper, Mr. Kwesi Pratt Jnr and the Member of Parliament for the Ningo Pampram Constituency, Mr. Sam Dzata George Nartey.

In 2019, several NDC supporters sustained various degrees of injury during the by-election that saw the New Patriotic Party's Member of Parliament, Lydia Alhassan, elected after the death of her husband, Mr. Kyeremanten Agyarko, who was the incumbent MP at the time.