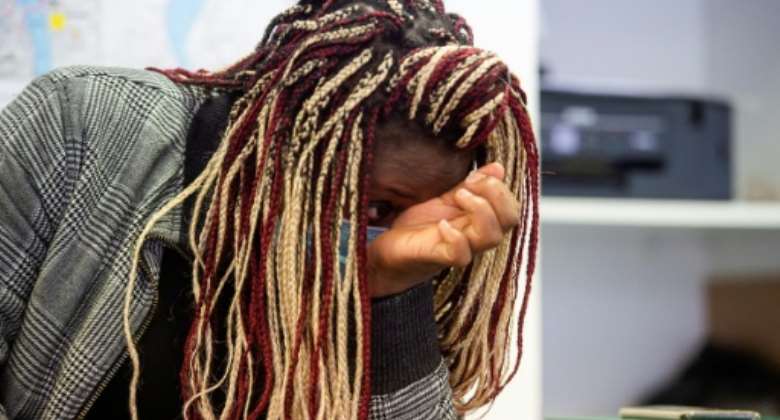 Forced to marry as a teenager, Merline fled Cameroon to escape, embarking on a years-long journey blighted by sexual violence across deserts and the Atlantic in a desperate bid to reach France.

Travelling as a woman on her own for most of the journey, it took her four years to do it, finally reaching France pregnant and with a toddler in tow.

Merline was one of at least 37,385 migrants who arrived in Spain by sea last year, with arrivals rising significantly over the past two years, particularly in the Canary Islands after an increase of patrols in the Mediterranean.

After years in a violent and abusive marriage, Merline said she wasn't thinking about going to Europe when she left.

"I just ran," she told AFP after crossing from Spain into France, her head covered with black, gold and burgundy braids.

She was just 15 when she was "forced to marry a man who was 45". Beaten and abused, she became pregnant and had her first child with him but says she was "destroyed" by the marriage.

When he died in 2016, she had to marry his brother, according to Merline who only gave her first name in order to protect her family.

By the end of 2017, she couldn't carry on and fled, taking the heartbreaking decision to leave her son behind.

Initially she stayed with her mum, but then left when her husband's family started issuing threats. Then she went to a friend who gave her 40,000 CFA francs (60 euros) to pay smugglers to take her into neighbouring Nigeria.

She worked in a restaurant there for three months to try and save 345 euros to pay smugglers to take her across the desert in Niger and get her to Algeria.

Cameroonian Merline says once you're in the desert there's nowhere to run... the rapes just happen. By ANDER GILLENEA AFP

"That's when the most difficult part began," says Merline, now 30, sitting in the Bayonne offices of La Cimade, a French NGO that is helping her make her asylum claim.

Once you're in the desert "there's nowhere to run... the rapes just happen", she says.

The desert route to Algeria brings back memories "of death" and "water reeking of petrol" that was shared around in jerrycans, she says.

After arriving at Tamanrasset, a desert city in southern Algeria, she spent several days without going out for fear of being caught by the police.

There the smugglers would take any newly-arrived woman to small bars where they would be "forced" to prostitute themselves to pay for the leg of their journey to Europe.

But she narrowly escaped that fate thanks to another migrant from Cameroon, with whom she had a child, now a lively two-year-old who clambers all over her lap as she talks.

She had initially wanted to work in Morocco but couldn't make any money, so she travelled to Western Sahara with the aim of getting the boat to the Canary Islands.

Her partner didn't go with her because he couldn't afford to go as well but he hopes to eventually join her and their two children.

Travelling with a toddler

In the Atlantic town of Dakhla, she was charged 2,500 euros by hooded smugglers for her and her son to take the boat to the Canary Islands.

In September, she boarded the wooden fishing boat with another 60 or so people, a third of them women along with a dozen children.

Cameroonian Merline was forced into an abusive marriage with a 45-year-old man when she was 15. By ANDER GILLENEA AFP

"There, only God has your fate in his hands because just the slightest thing can leave you in the water and no one is going to risk their own life to save you," she says.

After two days at sea, the boat reached the island of Gran Canaria, where she stayed for two months before being sent to a reception centre in Seville, in southern Spain.

Struggling with the language, she finally decided to go to France "to educate my son in French", eventually saving up enough money to reach Spain's border with France and pay the "taxi-mafia" 100 euros to get her across.

She thinks she may one day end up working with "elderly people or children".