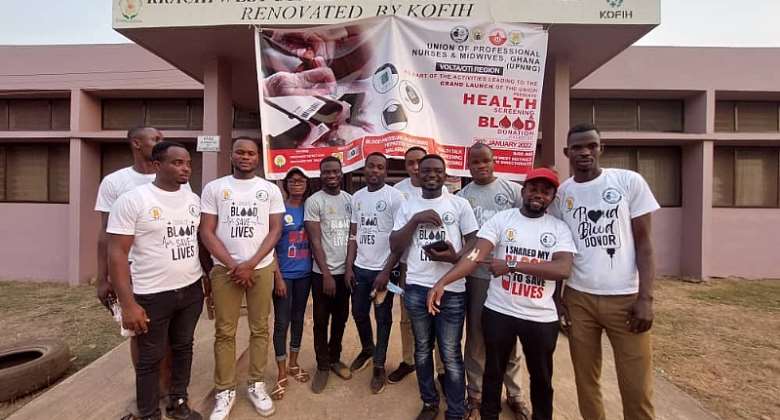 The Union of Professional Nurses and Midwives, Ghana (UPNMG) as part of the preparation for national launch, is organizing medical outreaches in some parts of the country.

On the 20th of January 2022, the Volta/Oti and the Central Regional branches of the Union commenced the preparation towards the grand launch with well patronized medical outreaches which included blood donation exercises as well as free medical screening for a various health conditions such as Hypertension, HIV, Hepatitis B and Malaria. Sugar levels (Random Blood Sugar), as well as Hemoglobin levels, were also checked for people at no cost.

In the Volta/Oti Region, the exercise was organized in Kete-Krachi, within the premises of the Krachi West Municipal Health Directorate.

The exercise was supported by the Municipal Hospital and the Municipal Health Directorate. Over 60 people availed themselves for the blood donation exercise and 100s more were medically screened.

The occasion was also graced by the Krachi West Municipal Hospital Deputy Director of Nursing Services (DDNS) as well as the Volta Regional Public Health Nurse.

In the Central Region, the exercise was organized in collaboration with the Cape-Coast Teaching Hospital. It took place at the Abora market. Several pints of blood were donated as others were screened for various medical conditions.

Other regions are also expected to carry out their activities in the coming days in preparation for the mega national launch of the Union of Professional Nurses and Midwives, Ghana (UPNMG).

The Union of Professional Nurses and Midwives, Ghana (UPNMG) which has been at the forefront of the nursing and midwifery profession has been relentless in its quest to improve the working conditions of nurses and midwives in the country.

The UPNMG is the first Union within the noble nursing/midwifery profession to institute a loan scheme dubbed the 'UPNMG Loan Scheme' for its members which runs at an interest rate of 11%.

The UPNMG is again, the first to commence a hire purchase for its members dubbed the 'UPNMG Mart/UPNMG Hire Purchase Scheme' which has been in operation since May 2020.

Leadership of the UPNMG have also cushioned its members with the 'UPNMG Insurance' via a partnership with Enterprise Life Insurance and are also set to roll out the UPNMG Land Policy.