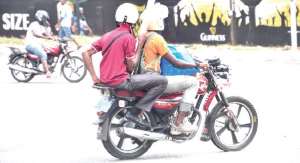 The Upper East Regional Security Council (REGSEC) has placed a ban on motor riding in Bawku and its immediate environs following renewed clashes.

It can be recalled that early this month, REGSEC announced a ban on pillion riding as a measure to prevent clashes between feuding parties from escalating.

Following reports of a shooting incident in Bawku that resulted in four casualties, REGSEC has issued a release banning the riding of motor bikes in the Bawku Municipality.

“The Regional Security Council (REGSEC) has examined the security situation and its volatile nature in the Bawku township and with immediate effect imposes a ban on riding of motor bikes in the Bawku Municipality and its environs.

“It is also instructive to note that this ban does not include motor tricycles. The ban affects both sexes,” a press release signed by the Upper East Regional Minister Aon. Stephen Yakubu has said.

With immediate effect, REGSEC requests that MUSEC enforces this directive with the urgency it deserves until further notice.

Information gathered indicates that there are tensions in Sabongari, Kariyama, and Gingande due to Sunday’s shooting.

Read the REGSEC statement below: