Finance Minister announce transactions to be excluded from E-Levy charges 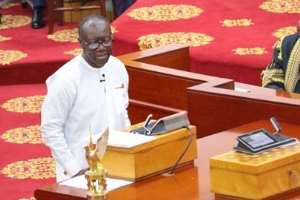 The Minister for Finance, Ken Ofori-Atta has announced some transactions that will be excluded from charges when the Electronic Transaction Levy (E-Levy) is approved and implemented.

The Minister late last year disclosed plans by the government to introduce a new levy on electronic transactions when he visited Parliament to present the 2022 budget statement.

At a media engagement on Wednesday, January 19, 2022, Finance Minister Ken Ofori-Atta has opened up steps to be taken.

He told the media that cumulative transfers of GHC100 per day made by the same person will not be charged.

In addition, transfers between accounts owned by the same person will not be subject to the proposed 1.75% charge.

Meanwhile, transactions to be charged by the E-Levy include:

Discussions on the Electronic Transaction Levy in Parliament were inconclusive in December last year.

As the House prepares to resume sitting on Tuesday, January 25, 2022, the Minority and the Majority are expected to continue engagements to decide the fate of the levy.

Hottest Photo Reports
Catch up with all the political quotes from our politicians.
Advertise here
More Headlines
ModernGhana Links
US groups offered me money to drop anti-LGBTQ+ bill, they wanted sort me out for life – Sam George
Reforming 1992 Constitution: Abu Sakara charges NCCE to lead the way to get gov’t involved
45 years in ministry: Bawumia congratulates Archbishop Duncan-Williams for touching lives
You’re father to many; no wonder you're called 'Papa' – Bawumia praises Duncan-Williams on 65th birthday
Petrol, diesel, LPG prices to go up this week—COPEC, IES predict
NDC cannot support collateralisation of every source of future revenue; Agyapa deal must go – Mahama
‘We’re committed to protecting you from robbery attacks’ – Akufo-Addo to MoMo vendors
You're blessing to Ghana, Africa and the world — Mahama celebrates Duncan-Williams on 65th birthday
‘My big brother’ John Ndebugre was a mentor, comrade – Mahama
TOP STORIES

Prepare for hunger in Ghana — GAWU warn Ghanaians
56 minutes ago