US sanctions on Zimbabwe's elite ricochet across economy 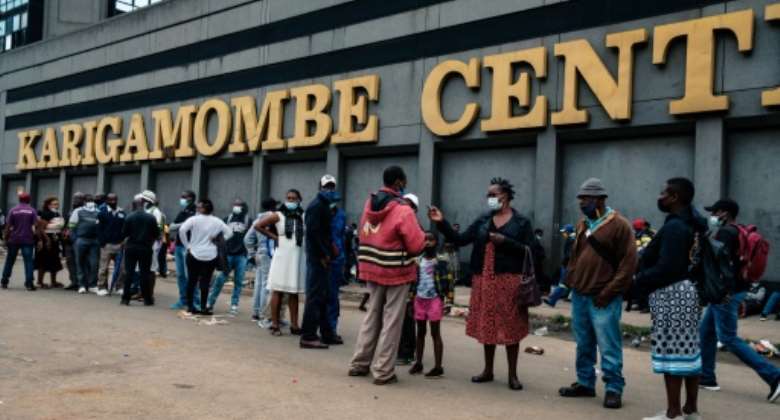 Greenback shortage: People in Harare line up to withdraw US dollars on Christmas Eve. Some were so desperate for hard currency that they even slept in the queue to keep their place. By Jekesai NJIKIZANA (AFP)

Callisto Jokonya stands in the cavernous factory of Imperial Refrigeration and recalls the halcyon days.

In the 1990s, his factory, located in the Zimbabwean capital Harare, was buzzing.

It had a workforce of 350 people, who cranked out 20,000 refrigerators per year.

Weeds grow outside many of the buildings in the surrounding industrial area. Some of the factories have been mothballed for years.

"Just that tells you what sanctions are," Jokonya told AFP.

Production at Callisto Jokonya's refrigerator company is just five percent of what it was in the 1990s. By Jekesai NJIKIZANA (AFP)

He refers to one of biggest wounds suffered by the Zimbabwean economy -- US-led sanctions imposed two decades ago when then president Robert Mugabe launched a violent election crackdown.

Intended to apply to the elite, the sanctions imposed travel bans and a freeze on assets held top Zimbabwean officials.

But the measures have had a far-reaching -- and probably unintended -- impact on the Zimbabwean economy by strangling the country's access to the international banking system.

To take the case of Imperial Refrigeration, Jokonya wanted to get a loan to expand production at Imperial.

All his equipment needs to be imported, for which he has to pay in US dollars.

But the American law, known as the Zimbabwe Democracy and Economic Recovery Act (Zidera), forbids global lenders from working with Zimbabwe.

Institutions like the International Monetary Fund (IMF) are usually the first line of support for countries in financial trouble.

Zimbabwe has not met all of the requirements for IMF support -- and Zidera means there is little incentive for Harare to try, or for the IMF to look at compromises.

Production at Callisto Jokonya's refrigerator company is just five percent of what it was in the 1990s. By AFP (AFP)

The result is that Zimbabwe has meagre supplies of US dollars at home, and it is risky for entrepreneurs to seek access to greenbacks abroad via private banks.

A UN expert said after a visit in November that 87 financial institutions had stopped doing business with Zimbabwe for fear of running afoul of the sanctions.

Foreign leaders often have much leeway to adjust sanctions over time.

But in the case of Zidera, the punishment is enshrined in US law, which would require any changes to be endorsed by Congress.

Indeed, the latest version of Zidera, passed in 2018, further raises the threshold for lifting the sanctions.

There are plenty of Zimbabwean dollars, but greenbacks are rare. By Jekesai NJIKIZANA (AFP)

But it also demands that Zimbabwe adhere to a southern African court ruling to pay some nine billion US dollars to white farmers whose properties were seized during Mugabe's land reforms two decades ago.

Zimbabwe's entire GDP is only 16.7 billion US dollars. Harare has made initial payouts of 53 million dollars, a tiny fraction of the amount demanded.

To manage the country's limited foreign reserves, the central bank holds weekly auctions of US dollars. Policymakers allocate the dollars based on which applications they believe are most urgent.

"They give you (dollars) but it's not enough," Jokonya said. "It will not bring anyone to full production."

Other African nations and a UN rapporteur support removing sanctions, but such thinking gets little traction in Washington.

"Blaming US sanctions for Zimbabwe's problems detracts from the core issues of better governance... required in Zimbabwe," US State Department spokesman Ned Price said by email.

Western countries imposed sanctions in response to a crackdown by Mugabe. By Jekesai NJIKIZANA (AFP)

But the reality for Zimbabweans is that they cannot even use services like PayPal to order goods from overseas, said government spokesman Nick Mangwana.

Economist Gift Mugano said the sanctions effectively cut Zimbabweans off from international credit and money transfers in US dollars.

Zimbabwe's wealthy simply travel and bank in Asia and the Middle East to avoid the sanctions, said political analyst Eldred Masunungure, of the University of Zimbabwe.

Ordinary people have no such luxury, he noted.

Instead of bringing political change to Zimbabwe, the 20 years of sanctions are merely "used as an alibi for poor economic performance by the government," he said.