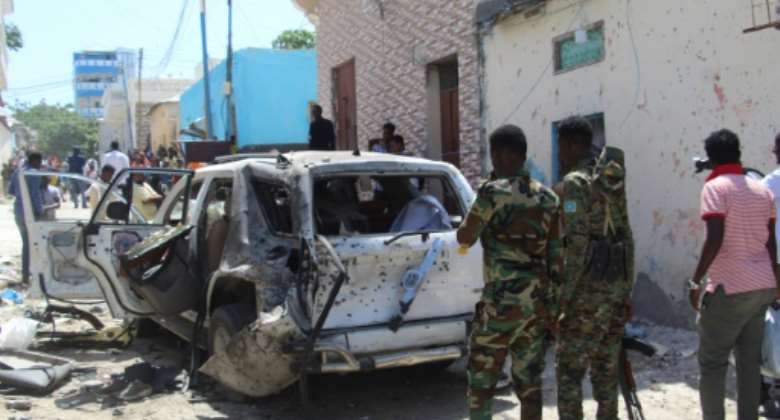 The Al-Shabaab jihadist group claimed responsibility for the attack. By - AFP

A Somali government spokesman was wounded Sunday in an attack by the Al-Shabaab jihadist group, though his wounds are "not serious," the prime minister's office said.

Sunday's attack, for which Al-Shabaab claimed responsibility, came a week after Somali leaders agreed to wrap up parliamentary elections by February 25, following repeated delays that have threatened the stability of the troubled country.

More than a year of delays had deepened bitter tensions between Prime Minister Mohamed Hussein Roble and President Mohamed Abdullahi Mohamed, better known by his nickname Farmajo, amid fears their squabbling could erupt into violence.

"The spokesman of the Somali Federal government was wounded in a terrorist attack," the office said in a statement. Mohamed Ibrahim Moalimuu's "injuries are not serious and we wish him quick recovery."

Multiple sources said the attacker, who was killed in the incident, attempted to get onto the spokesman's car before detonating explosives, partially destroying the vehicle.

"A suicide bomber jumped onto a vehicle transporting the spokesman of the government of Mohamed Ibrahim," said a policeman at the scene of the attack, Mohamed Farah.

"He was lucky to have survived with light injuries," Farah said, adding that two other people were injured.

Witnesses confirmed that the attacker had pressed himself against the car before a loud explosion was heard.

One witness, Abdirahman Moalin Ali, said he had seen "human body parts strewn across the area".

Al-Shabaab swiftly claimed the attack in a statement.

Moalimuu has been a spokesman and adviser to the prime minister for more than a year, having previously been a journalist with the BBC, and is a former secretary general of the National Union of Somali Journalists.

He has survived several attacks on residences where he has been staying, escaping unharmed from a 2019 attack on one property which was besieged for almost 22 hours.

Emergency medical workers remove the body of the suspected suicide bomber. By - AFP

Farmajo, president since 2017, saw his mandate expire on February 8 last year and failed to organise elections prior to announcing in April he was extending his rule for two years -- a decision which prompted armed unrest in the capital.

He eventually tasked Roble with organising fresh polls but a disagreement over the election process set off a bitter power struggle between the two leaders.

In December, Farmajo suspended Roble having appointed him in September 2002 -- leading the latter to speak of an "attempted coup" and the opposition to demand the president's resignation.

The ongoing unrest has set alarm bells ringing in the international community, which fears an election impasse will further undermine stability, emboldening Al-Shabaab, whose fighters control vast swathes of the country.

Following the decision to wrap up polls by February 25, a new president of the electoral commission was voted in Saturday, his predecessor having been fired by Roble.

On Saturday, Roble said: 'The only solution we have for this country is holding the election so myself and the rest of the member state leaders must take bold steps to hold and complete the elections timely.'

He said the electoral process should resume the same day.

Under the Horn of Africa nation's complex indirect electoral system, the five federal state assemblies and delegates chosen by clan delegates nominate lawmakers for the national parliament, and they in turn choose the president.

Elections to the upper chamber have finished in all of the states save for the central state of Galmudug, and voting began in November to the lower house.