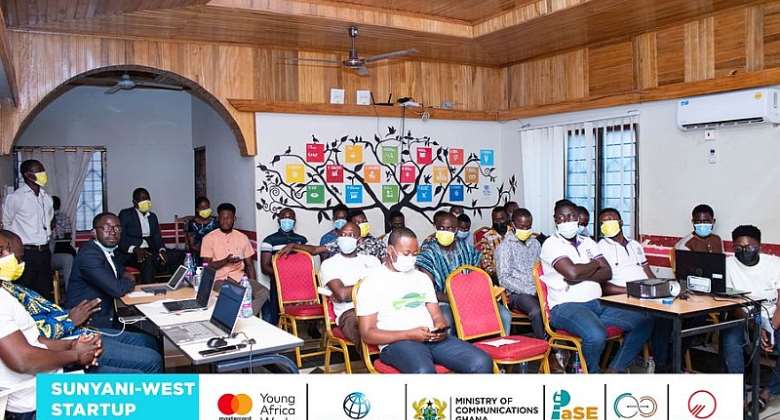 GrassRoots Hub, the stage was finally set for the “Battle of Ideas” at the Sunyani West Startup

GrassRoots Hub, the stage was finally set for the “Battle of Ideas” at the Sunyani West Startup

Ing Joseph Owusu, Lecturer at the Electrical and Electronics Department of the University of Energy and Natural Resources, Sunyani, has made a carrion call for citizens to patronize made in Ghana digital innovations.

He made this passionate call during the ‘Sunyani Startup Summit 2022’ organized on 13th January 2022 in Sunyani by GrassRoots Hub, through the partnership with Ghana Tech Lab and support from Master Card Foundation, World Bank, Young Africa Works, and Ministry of Communication and Digitalization Ghana, under the theme: ‘Mobile Applications for Sustainable Business Development and Job creation in Sunyani’.

The summit set the stage for 5 startups including, PalmTeck, Comfortex, skyTeck, 3As Solutions, IGNITE, to battle their ideas out; as they articulated the visions, missions and how they intend to implement them before our team of judges.

At the end of the pitching, team IGNITE whose mission is geared towards bridging the gaps among humanity, thus exposing them to an environment of opportunities and problem-solving capacities with the aid of modern technology, emerged winners.

The summit comes right after the mobile app development training which ended in December- as the first and second phases under the Pathway to Sustainable Employment (PASE) programme respectively.

Whiles speaking at the event, Mr. Nana Damoah, Executive Director CERK Impact Drive (CID), highlighted the essence of starting one’s own business. However, he was quick to add that the road to success maybe bumpy but there’s always a light at the end of the tunnel, he then and charged the startups to remain focused in the face of difficulties.

In her welcome address, Ms. Diana Kwaaba, manager of the Hub, described the journey of the trainees and the way forward after the summit. She elaborated on the goal of the PASE programme, citing the alarming rate of unemployment in the country. She, however, drummed home the need to embrace entrepreneurship since that is the surest way to end unemployment phenomenon in Ghana and more specifically Bono region.

On the part of Ms. Christabel Andoh, Business Development lead, GrassRoots Hub, she commended the trainees of the cohort for their commitment and professionalism. She, however, encouraged the trainees who have become startups to continue in that same spirit as the PASE programme progresses into another phase.

’’ With the kind of ideas been exhibited here today, it gives me enough hope, the future of Bono region looks so promising. ‘’ said Robert Kwasi Oppong, Communication officer, GADeF International (GrassRootsHub) as he stated his optimism about the project.