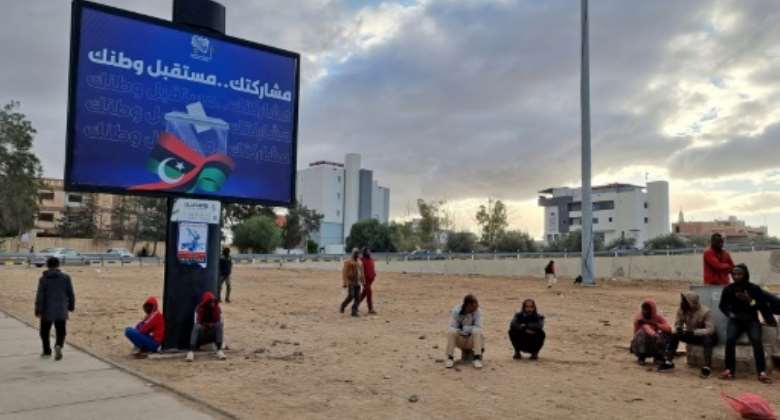 A roadside billboard in the capital Tripoli urges Libyans to turn out to vote in Friday's presidential election even as it looks ever less likely it will go ahead. By Mahmud TURKIA (AFP/File)

Authorities overseeing war-torn Libya's first presidential election have confirmed that holding it on Friday as scheduled is "impossible" and suggested a month-long delay.

The vote was intended to mark a fresh start for war-torn Libya, a year after a landmark ceasefire and more than a decade after its 2011 revolt that toppled and killed dictator Moamer Kadhafi.

But speculation of a delay had been mounting for weeks, amid bitter disputes over the vote's legal basis, the powers of the winner and the candidacies of several deeply divisive figures.

On Wednesday, the chairman of the parliamentary committee overseeing the vote wrote to the assembly's speaker saying that "after consulting the technical, judicial and security reports, we inform you of the impossibility of holding the elections on the date of December 24, 2021".

It did not propose an alternative to Friday, a date set last year during UN-led peace talks in Tunis.

The election, intended to go hand-in-hand with parliamentary polls, was part of a United Nations-led peace process overshadowed by corruption allegations and the resignation of special envoy Jan Kubis just weeks before the elections.

The process was also mired by rancorous divisions over whether controversial figures should be allowed to stand.

Seif al-Islam Kadhafi, a son of Moamer, and eastern military chief Khalifa Haftar were both in the running despite accusations of war crimes.

Interim Prime Minister Abdulhamid Dbeibah's candidacy also sparked controversy as he had pledged not to run as part of his original leadership bid.

"Every single faction in Libya has an issue with one of these three candidates," said Claudia Gazzini, a Libya expert at the International Crisis Group.

"So they tried to stop these candidates from running using legal means, but failing that there seems to have been an informal agreement between some factions not to let the elections go forward," she told AFP.

Many analysts have warned that violence could easily flare again surrounding the elections.

The political uncertainty has raised tensions on the ground across Libya, controlled by an array of armed groups, including thousands of foreign mercenaries.

Gunmen had deployed in the suburbs of Tripoli on Tuesday, using a tank and machine gun-mounted pickup trucks to block roads in the Fornaj district, although tensions eased later in the day.

US ambassador to Libya Richard Norland on Wednesday "urged calm and encouraged steps that can continue to de-escalate the tense security situation".

"Now is not the time for unilateral actions or armed deployments," the embassy said in a statement.

"At the same time, work towards elections should be a priority, in line with strong public desires."

Amanda Kadlec, a former member of the UN Panel of Experts on Libya, warned that "if elections are postponed without any kind of path forward, then anxieties will be high.

"I could totally envision there being a breakout of conflict at local levels that could erupt and cascade into other parts of the country or within each region," she told AFP.

But the country's electoral board the HNEC later Wednesday suggested delaying the vote to January 24.

Libya expert Wolfram Lacher tweeted that the House of Representatives would have to approve the date, "which it is unlikely to do."

Analysts had suggested that the delay in announcing a postponement was because no side wanted to take responsibility for the election being cancelled.

Libya has seen a year of relative calm since the October 2020 ceasefire following a year-long offensive by Haftar's forces on Tripoli, with both sides backed by foreign states.

But with vast stockpiles of weapons left behind by the Kadhafi regime, the potential for new fighting in Libya remains ever-present.