Armed groups deploy in Libya capital amid tensions over election 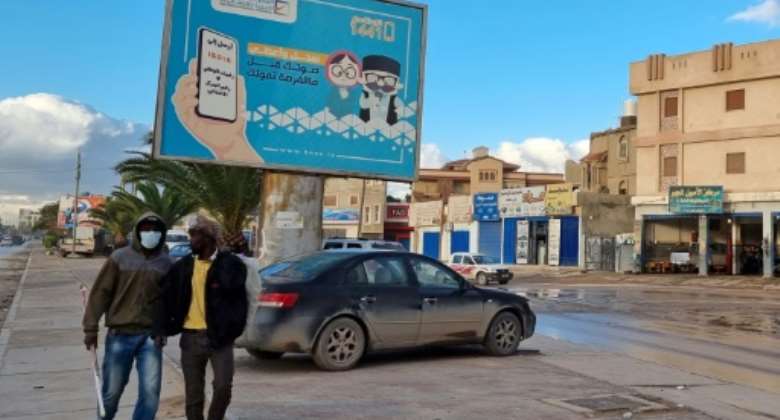 Workers in Libya's capital Tripoli pass an electoral billboard reading in Arabic, 'Register and vote before missing your chance' -- but a postponement of the ballot is widely expected. By Mahmud TURKIA (AFP/File)

Armed groups deployed in the suburbs of Libya's capital on Tuesday, sparking security fears ahead of an expected delay of presidential elections, as three key candidates met in the country's east.

The vote was meant to cap a UN-led peace process after a ceasefire between eastern and western camps last year, but with no final candidate list published just two days ahead of polling, few believe they will go ahead.

The political uncertainty has raised tensions on the ground across Libya, controlled by an array of armed groups in a decade of conflict following the 2011 revolt that overthrew longtime dictator Moamer Kadhafi.

Images posted online early Tuesday showed a tank and pickup trucks mounted with machine guns in Fornaj district, where some roads were blocked by armed men.

Schools and the University of Tripoli closed as a precaution but there were no firefights, residents told AFP.

It was the latest in a string of security incidents ahead of scheduled elections that have been undermined by divisions over their legal framework and the candidacies of several divisive figures.

One of the most controversial is eastern-based military strongman Khalifa Haftar, who from 2019 waged a year-long but ultimately failed campaign to seize Tripoli by force.

The content of their talks was not disclosed, but an adviser to Bashagha told AFP that the reason for the visit was to "break down obstacles... and show that it is possible to unite".

Haftar is not the only divisive front-runner in the polls.

Seif al-Islam Kadhafi, son of Moamer, is also in the running despite facing accusations of war crimes and an arrest warrant from the International Criminal Court.

Abdulhamid Dbeibah, the head of a unity government installed by the UN-led process in March, is also standing despite having pledged not to.

"Every single faction in Libya has an issue with one of these three candidates," said Claudia Gazzini, a Libya expert at the International Crisis Group.

"So they tried to stop these candidates from running using legal means, but failing that there seems to have been an informal agreement between some factions not to let the elections go forward."

No party has officially announced the polls will be delayed, but such a move is widely viewed as a foregone conclusion, partly due to the difficulty of holding a free and fair vote given the fragile security situation.

By Tuesday afternoon, roads in Tripoli that had been closed were reopened and fewer gunmen were on the streets, an AFP correspondent said.

Libya's Tripoli-based unity government, which took power in March with a mandate to take the country to elections, did not immediately comment on the developments.

The United Nations' Libya mission UNSMIL voiced concern over the armed deployments, warning such mobilisation "creates tensions and increases the risk of clashes that could spiral into conflict."

In a statement, it called for the resolution of any disagreements through dialogue, "particularly at this stage when the country is navigating through a difficult and complex electoral process that should usher in a peaceful transition."

The Libyan capital is under the control of an array of armed groups affiliated with the defence and interior ministries.

Libya has been relatively calm since a landmark ceasefire between eastern and western camps in October last year, but despite high hopes for peace the UN has struggled to overcome the country's deep, complex divisions.